Reshoring Initiative Has a Roadmap for American Manufacturing

At the International Manufacturing Technology Show in Chicago, the Reshoring Initiative‘s Harry Moser laid out what he called the “reshoring roadmap” of what congress and the next president need to do to bring manufacturing jobs back to the U.S.

Moser said that rapid job loss has been stemmed in the U.S. but more needs to be done to bring manufacturing jobs back to the U.S. The roadmap included corporate tax reform to make the U.S. more competitive with countries like Ireland, which boasts a 2% corporate tax rate. Republican presidential nominee Donald Trump has said he will lower the corporate tax rate of 39.1%. Democratic nominee Hillary Clinton has said she will raise taxes on “corporations and wealthy individuals.”

Don’t Drown in the VAT

Another part of Moser’s roadmap is a value-added tax in the U.S. A VAT is a type of general consumption tax that is collected incrementally, based on the “value added,” at each stage of production and is usually implemented as a destination-based tax, where the tax rate is based on the location of the customer. If I purchase something from the U.K, I would have to pay the vote to get it imported into the U.S. 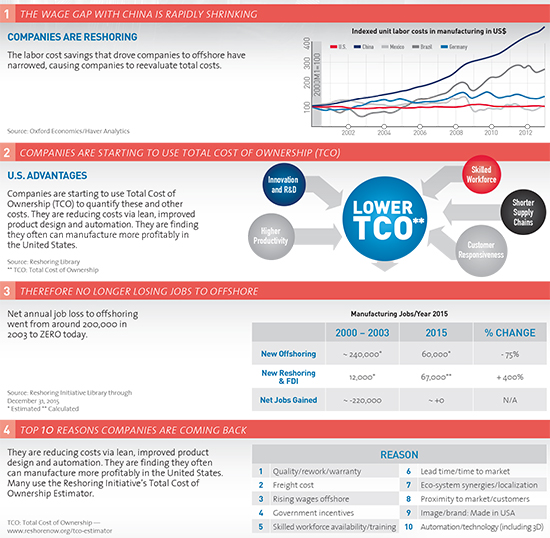 Companies are reshoring jobs to the U.S. Source: The Reshoring Initiative.

There are two main methods of calculating VAT: the credit-invoice or invoice-based method and the subtraction or accounts-based method. Using the credit-invoice method, sales transactions are taxed, with the customer informed of the VAT on the transaction, and businesses may receive a credit for VAT paid on input materials and services. The credit-invoice method is the most widely employed method, used by all national VATs except for Japan. Using the subtraction method, at the end of a reporting period, a business calculates the value of all taxable sales then subtracts the sum of all taxable purchases and the VAT rate is applied to the difference.

Moser said that the U.S. “Is on the wrong side of a tilted chessboard,” and that a VAT would help change that.

Yet, the U.S. does collect other import taxes and the very idea of passing a VAT has not been popular with both manufacturers and buyers in the past and such a tax is opposed by conservatives precisely because it makes it too easy for Washington to tax everyday transactions Americans make (try buying something from a VAT country on Amazon.com) when sales taxation has always been a state matter in the U.S.

State sales taxes could still be enforced on top of a VAT but that would heavily increase the debt burden on consumers, especially in states where there is a high sales tax and a state income tax. Countries with VATs have a much heavier total tax burden than those without VATs. Before the creation of VATs, the burden of taxation in Europe was not that much larger than it was in the U.S. However, since the late 1960s, when countries in Europe began to adopt VATs, Europe’s aggregate tax burden has increased by about 50% while the U.S. tax burden has remained relatively constant.

They also believe, with some fairly startling examples such as Greece, that a VAT undermines economic growth. First, it reduces the incentives to engage in productive behavior by driving a larger wedge between pre-tax income and post-tax consumption. In Greece this resulted in tons of off-book, cash transactions that were never reported as income in the tourism sector. Greece’s VAT is a startling 24%. Their business community wasn’t for the most recent hike.

Second, it facilitates larger gov­ernment and the concomitant transfer of resources from the productive sector of the economy to the public sector, diminishing economic efficiency.

That’s a double whammy for buyers and manufacturers (who need raw materials) who are already paying the high national corporate income tax.

PREVIOUS POST:
What Trump Trade Talk Should Focus On: Our Charts of the Week
NEXT POST:
Half a Billion More Solar Panels? That’s a Renewables Pipe Dream