Home | Commodities | OPEC Deal: Historic Oil Price Breakthrough? Or Kicking the Can Down the Road?
Commentary

OPEC Deal: Historic Oil Price Breakthrough? Or Kicking the Can Down the Road?

The Organization of Petroleum Exporting Countries’ first agreement to cut oil production since the financial crisis — reached at a meeting in Algiers last week — can be seen as something of both.

The market reacted positively to news of an output cut, with both Brent Crude and West Texas Intermediate surging 6% before a little profit taking took over. Not surprisingly, oil company shares also perked up with some smaller oil companies up 7-10%. 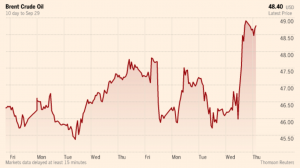 The gist of the agreement, such as it is, is to cut production to 32.5-33 million barrels a day with seemingly all OPEC members agreeing, in principal, to the plan and some non-OPEC members like Russia giving cautious support, essentially saying “if they stick to it we may make some modest cuts, too.”

How Strong an Oil Price Deal is This?

A major breakthrough? Well certainly a much more positive and unified position than came from the last meeting in April which collapsed in acrimonious dispute particularly between Saudi Arabia — the architect of the current glut — and its regional arch rival, Iran. Clearly, behind the scenes, some form of agreement has been reached with Iran that they will be allowed, when the final quotas are agreed in Vienna on November 30, to pump close to 4 million barrels. This was the magic number Iran was producing before sanctions and some say is probably all they could produce with current infrastructure and technology, anyway.

The problems are manifold but two stand out. First, there is as yet no agreement as to who cuts and by how much. OPEC pumped 33.24 million bpd in August, so they are aiming for a reduction of 240,000 to 740,000 bpd from this agreement.

The lower end of the range would not be enough to tighten the market from a supply and demand point of view, the upper end might, just barely, if the numbers that members actually pump are to be believed and if a rise in prices that may result does not encourage a surge in U.S. shale production, much of which has innovated and invested to the point it is profitable even at current prices.

Oil analysts believe between 700,000 and 1 million bpd needs to be taken off the market to have a meaningful impact on global supplies and prices. Still, sentiment is a powerful driver of prices and anything the market believes is north of half a million reduction may be enough to lift prices in 2017.

The next problem is who cuts and by how much. The production range is said to be to allow for a recovery from war and terrorist-ravaged production in Libya and Nigeria, both of which have suffered this year but have the potential to produce more. Rather than Iran being the fly in the ointment, this time it could be Iraq.

According to the Financial Times the Iraqis are saying the current estimates of what they are pumping is too low. In practice, they are pumping 300,000 bpd more than secondary sources suggest, meaning if they are given a cap it is likely to be well below where they really are and they will refuse to accept it.

Meanwhile, those very resourceful shale drillers are still producing at prodigious rates in spite of Saudi Arabia trying to bankrupt itself to stop them. U.S. production has dropped by only about 10% since late 2014, but the companies that have survived are now leaner and more efficient. It would not take much of a price rise for investors, with scant few opportunities elsewhere to invest, to plow back in to the sector and drilling in the U.S. to pick up.

So, before you scramble to hedge your energy price exposure you may want to give it a few weeks for this “agreement” to unfold. There is plenty of scope for it to unwind before it is ever formally agreed. The devil as they say, remains in the details, and that won’t be worked out until November 30 at the next OPEC summit.