The Aerospace Supply Chain is Slowing

The aircraft market is having a pause.

Suggestions that sales have collapsed or that airlines are cancelling orders are overdone. After several years of record sales and the buildup of a huge backlog, it was inevitable that new orders would slow at some point. Not least of which because aircraft makers are a victim of their own success.

Order backlogs are so long airlines are looking at new models scheduled to come out in a few years and saying, “why order the existing model — which won’t be delivered for years — when we could order the more fuel-efficient or longer-range model in a year or two from now?”

In an article this week, the Financial Times reviews slowing sales for wide-body, twin-aisle aircraft and asks is it a long-term trend that will continue or is it a result of short-term problems manufacturers have had with their new models?

At the recent peak in 2013, Boeing and Airbus logged combined net orders for 750 wide body jets. Orders fell in both 2014 and 2015, and so far this year the companies have scraped together deals for a mere 123 jets, the paper reports. But sales of single aisle aircraft have held up better as low cost carriers in particular have started flying further with smaller aircraft.

The paper quotes industry sources that say the share of widebodies in the global fleet has shrunk from roughly 25% in 1990 to about 19% today. About half of the routes flown by widebody aircraft are less than 5,500 kilometers, well within the range of the Airbus A321LR and Boeing’s new narrow-body 737 Max jet.

Smaller aircraft reduce the carriers risk: they may cost a little more per passenger to run but they are not so hard to fill. Airlines will always need bigger aircraft for the most densely traveled long-haul routes, but the smaller aircraft are posing a challenge. 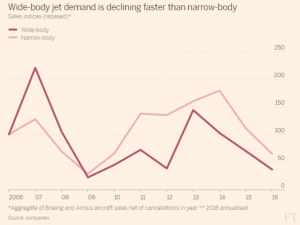 The widebody market has also suffered from some plane-specific issues. Sales of the Airbus A380 have been slow ATW reports and Airbus cut annual production rates from 27 in 2015 to 12 by 2018, which, from a personal perspective, I feel is a shame. The A380 is a pleasure to travel in, spacious and quiet compared to previous widebody aircraft like the jumbo.

Meanwhile, Boeing is now talking openly about the possibility of reducing production of the existing generation 777 twin-aisle jet, as customers wait for the more fuel efficient 777X. The U.S. company is also more cautious about plans to increase the rate on the widebody 787 Dreamliner from 12 to 14 a month.

What Does This Mean for Metal Suppliers?

All of this will impact suppliers work rates in the years ahead. Projects are solid in terms of longevity but annual production volumes can rise and fall directly impacting suppliers return on investments and profitability.

Mills, machine shops and component makers had geared up for an expected workflow based on substantial order books, but are now asking themselves to what extent the slowdown in sales is going to further impact production runs.

Aluminum and titanium aerospace has been a major driver of high value-add demand in recent years, encouraging mergers and acquisitions in the industry, investment and research and development. So far, the slowdown is not enough to call those decisions into question, but if single-aisle production rates were to follow twin-aisle, the market would look even less rosy for suppliers.

PREVIOUS POST:
IMF Downgrades U.S. Growth; Goldcorp Closes Mexican Mine
NEXT POST:
The DoJ and the Banks: Has a Political Prosecution Gone International?