This Halloween Season, Toyota’s Robot, Kirobo, Will Haunt You

How anyone can even contemplate bringing such a freakish looking robo doll into their home I cannot imagine. Not since “The Conjuring,” a 2013 film about a possessed doll called Annabelle, has quite such a scary looking item been released on the unsuspecting public. What was Toyota thinking?

What am I talking about? Toyota’s 10-centimetre (4-inch) tall talking robot called Kirobo Mini, which will be sold in Japan from next year for $392 (¥39,800) and claims to have the intelligence of a five-year-old. 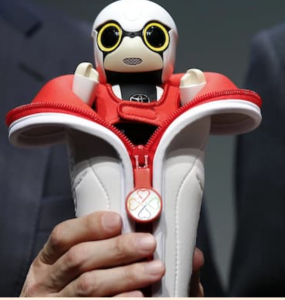 The idea of the robot is that it is supposed to provide an emotional connection, maybe particularly relevant for Japan’s aging population bereft of company, Kirobo is said to be able to learn phrases and recognize facial expressions with a built-in camera and sensors. A veritable helper robot with a personality.

The firm is heavily into artificial intelligence although they do not suggest Kirobo will go that far, yet, rather they are building on the platform built by Sony with their Aibo robotic dog; Toyota will be partnering with Vaio, the personal computer company that was spun off from Sony. Vaio’s plant in Nagano prefecture is also where Sony’s Aibo robotic dog was formerly produced.

As anyone who has lived with a five-year-old in the house will confirm, they can be the most manipulative and capricious of individuals. One hopes Toyota’s programmers do not take the “abilities of a five-year-old” too far or Kirobo may be rather more of a handful than Japan’s elderly but lonely seniors can cope with.

You wonder if Toyota has their target audience right, sure domestically in Japan their demographic may be crying out for such a product but internationally one could imagine plenty of single people living in rented accommodation who cant have animals would find something to talk to and have talk back an improvement on Siri. If they would just change that face….