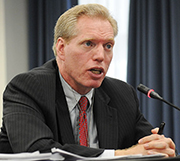 MetalMiner Managing Editor Taras Berezowsky recently sat down with Kevin Dempsey, Senior VP for public policy at the American Iron & Steel Institute. Dempsey leads the AISI public policy team representing the interests of North American steel producers and also serves as General Counsel to the Institute. Before that he was a practicing attorney who specialized in trade matters.

During his years on Capitol Hill and in the private sector, Dempsey has worked extensively on international trade negotiations, including the Doha Development Agenda and the original negotiations on the accession of China to the World Trade Organization. He also has considerable experience with U.S. and international law related to subsidies, trade remedies, market access, intellectual property rights, and product standards, as well as U.S. legislative procedures for authorizing and implementing trade agreements.

This is part two of their discussion. Read part one for more on the U.S., China, steel and trade matters. Today’s piece examines the role of international diplomacy and even the WTO.

Taras Berezowsky: If you could pick one of those big issues or pieces of control what would be the biggest one as far as AISI and the whole industry domestically is concerned about? Is there one pet issue that trickles down to everything else?

Kevin Dempsey: Well, for steel I think you have to say if you’re in the steel industry the biggest issue is Chinese state ownership and control of its steel industry.

Because that is at the heart of the distortions that we see in our sector in terms of the massive overcapacity of steel in China that is leading to huge levels of exports of Chinese steel around the world.

A lot of that is being driven by the fact that these Chinese entities do not respond to drops in demand the way a market industry would. A private company or private industry, when it sees a demand for its product drop and capacity utilization drops very low, the need to make a profit forces a private company to shut down operations and cut back.

Unfortunately, what we’ve seen with China is even as Chinese steel demand peaked in 2013 — and has been dropping since then — the amount of Chinese capacity in the steel sector has actually continued to increase. Whether their excess capacity, it just continues to grow, and they seek to deal with that by simply continuing overproduction and trying to export all the excess production onto world markets… that’s leading to surges in imports into the U.S. as well as a lot of Chinese steel that goes to third countries, it’s overwhelmed those markets and then leads those markets to try to further process and reexport that excess steel production to the U.S.

So, state ownership — and a lot of that’s at a provincial level where even if the central government in China says, “We’d like to reduce our excess capacity,” but because a lot of these steel companies are run at the provincial level, they can’t. Each province will say, “Well we don’t want to see the economic pain in our province.” Somebody else should reduce the capacity. Then, that further complicates the ability of the Chinese government to respond at all even to pressure from other governments to reduce its overcapacity.

TB: This has been a big question on my mind and, obviously, there are many tools at play — and have been at play for some time — that the U.S. government uses in terms of trade law and regulation and how the WTO can come into it, but do you foresee a specific kind of tool outside of the traditional anti-dumping and countervailing duty cases and everything that AISI has been at the forefront fighting for? Anything outside of that that would get China to change besides trying to figure out how to deal with tariff schedules and tariff systems?

How can we see them ever stopping the SOE bandwagon? Is there an end game there? How could we get our government to do anything?

KD: Well, yeah, it’s a difficult problem and it’s complex. There’s no single silver bullet here. It requires action on many levels. One, the U.S. government has to continue to fully enforce, aggressively, the trade laws against dumping and countervailing duties, against dumping and subsidies, that is against China and against other countries that do it because that’s the one thing that provides some immediate relief in our market from our domestic producers.

We have to stay firm on that, but that alone is not going to be enough. We have to also work closely with our allies in other countries because this is a global problem. China is exporting this excess production to many markets around the world, so we need to work with our allies to make sure they’re enforcing their trade laws as well so there’s no easy way out for the Chinese.

Then, we need to keep the pressure on through other channels like the G7 and the G20 with the highest levels of government via government-to-government discussions. Continue to put pressure on China to make reforms and to make the case that it’s necessary, because if they want to be a full and active and responsible member of the international community, they need to reform the aspects of their government policies that are leading to these global trade distortions. Then we need to look for every other tool that’s available.

You mentioned the WTO. I’m not a believer that there’s a WTO case that’s going to solve all of this problem, either, but there may be aspects of the Chinese system that can be addressed. We have successfully brought several WTO cases against China for restrictions they’ve placed on the export of raw materials.

A Special MetalMiner Project: Learn why China getting market economy status may just be the biggest trade issue of our time – and how it impacts the U.S. aluminum industry – in “China vs. the World.“

PREVIOUS POST:
Aluminum and Oil Prices: Keep an Eye on These Two
NEXT POST:
Week-in-Review: Rising Prices and a Campaign We Hope Will Finally End