Arbitrage Between US and Chinese Steel Prices Falls to Normal Levels

This summer, the price arbitrage between U.S. and international steel prices was huge. Well above historical levels. Two months ago we predicted that this unprecedented price arbitrage wouldn’t last, since enough holes existed in the anti-dumping duties to allow material to reach U.S. shores.

That’s exactly where we are right now. The price spread between Chinese and U.S. steel prices has fallen to normal levels. Prices in the U.S. have corrected while prices in China are holding well.

In the case of hot-rolled coil, the spread was never that wide since China was never a major exporter of HRC products into the U.S., so prices didn’t surge as much as with CRC, in which the U.S. imposed a super-high dumping margin on China. 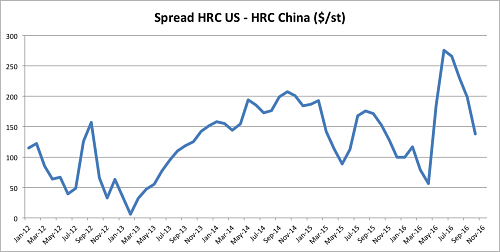 After the big slump in prices over the past two months, the spread is now below $150/st. So HRC prices in the U.S. don’t look too expensive compared to China’s anymore.

Cold-rolled coil prices in the U.S. are still expensive compared to China but not nearly as much as they were this summer. The spread between U.S. and Chinese CRC has halved in just a few weeks. 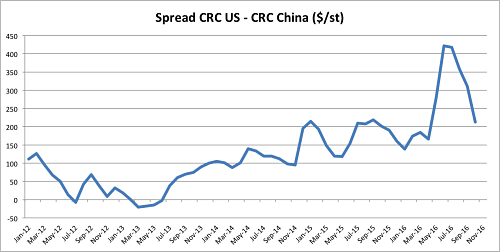 The spread has fallen from its peak at $420/st to stand now at $210/st, still elevated but not much above of what we are used to. 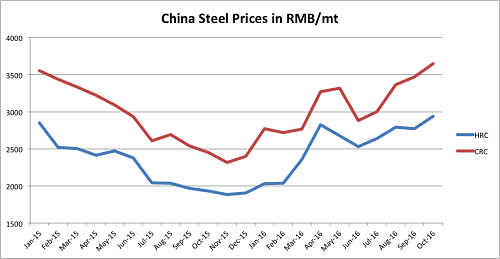 While prices in the U.S. are correcting, prices in China hit new highs in October thanks to China’s robust housing market.

What This Means To Metal Buyers

Although momentum in domestic prices keeps pointing south, the floor might be near given that Chinese prices are rising and the spread between U.S. and Chinese steel has come down to normal levels.

PREVIOUS POST:
All the Aluminum in China: How Long Can The Building Boom Last?
NEXT POST:
Voestalpine AG’s Texas HBI Facility a Natural Gas Success Story