An interesting pair of articles in the financial times last week covered a disturbing rise in auto repossessions following the failure of borrowers to meet repayments in the sub-prime automotive market.

Repossessions in the U.S. totaled 1.6 million in 2015, the third-highest level on record according to data going back 20 years, and only just falling short of the 1.8 million and 1.9 million peaks seen during and immediately after the financial crisis in 2008 and 2009.

That number, the FT says, is predicted to rise to 1.7 million this year as large numbers of individuals simply failed to repay the loans. 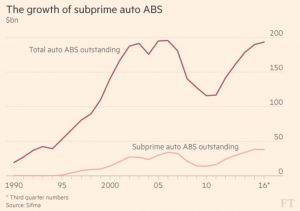 As competition in the auto loan market has grown, lenders have tended to relax standards, offering bigger loans to consumers and giving them more time to pay it back, the FT says. As a result, the sub-prime auto ABS market has grown to $38.1 billion, with net losses across the sector hitting 9.29% in September, according to Fitch ratings. That’s 23% higher than a year ago.

Fitch defines sub-prime ABS as a deal with expected net losses above 7% and, although the model builds in a considerable level of delinquency before lenders lose money, the trend is still a worrying one. Not so much because the sub-prime auto market represents systemic risk to the financial system but more because it illustrates two things: