Well, this is kind of embarrassing.

Four months after the U.K. defiantly voted to leave the E.U., that same organization and currency bloc has awarded $11.5 million (£9.6 million) in regional development funding to back a highly experimental new wave power project based at Hayle in northern Cornwall called Wave Hub.

Indeed, so key is the E.U. contribution that Carnegie Wave Energy, the company behind the project, is now confident it will be able to complete the first phase, a 1-megawatt trial facility due to be connected to the national grid in 2018.

The plan is this would be followed by a second phase intended to deliver 15 mw by 2021. Slightly embarrassing in that the E.U. regional development funds are intended to “strengthen economic and social cohesion” across the EU, not what slightly over half the U.K.’s voting population voted for, but there you are.

Wave energy has promised much and delivered almost nothing for decades. Two Scottish firms, Pelamis and Aquamarine, have both gone into administration in the past two years, as firms struggle to develop economically viable technology. Carnegie’s differs in that it operates underwater rather than on the surface, protecting it from breaking waves. The firm says it needs only a 1 meter (3 feet) swell to generate power, a state the sea delivers almost every day of the year off the cost of Cornwall, renowned for its Atlantic breakers and home to Newquay.

It’s said by some to be the capital of European surfing. The technology is therefore closer in some respects to tidal power than traditional wave power technologies and should require lower maintenance and offer a longer operating life than previous surface positioned wave designs. 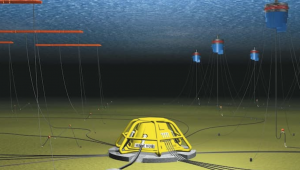 Bizarrely, Carnegie Wave Energy is not even a British firm, they are Australian but as the CEO, Michael Ottaviano, is quoted by the Financial Times as saying, Australia is blessed with an embarrassment of energy resources “so there has not been strong incentives for new technology.”

The U.K., and indeed Europe as a whole, is not so fortunate and, driven by a commitment to decarbonize the region, it’s willing to back new technologies if they show sufficient promise. In total, Wave Hub’s Hayle project will cost some $72 million (£60m) and should, all being well, start delivering power the national grid within two years.