As the dust settles from President-Elect Donald Trump’s historic win last week, we’re starting to see what it might mean for infrastructure. 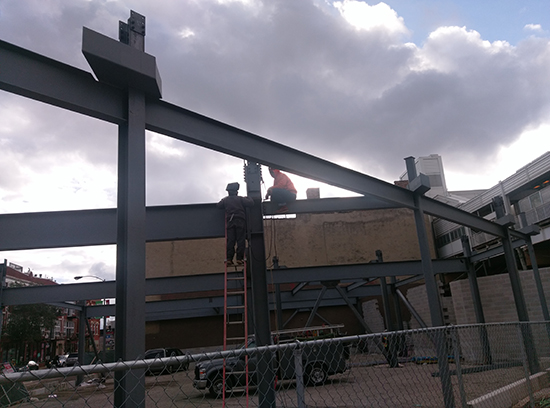 Is it a brand new day for privately funded public infrastructure projects? Or can only direct federal spending fix our roads, rail stations, bridges and airports? Source: Jeff Yoders.

Trump wants private investors to put money into projects in exchange for tax credits totaling 82% of the equity amount. His plan anticipates that lost tax revenue would be recouped through new income-tax revenue from construction workers and business-tax revenue from contractors, making the proposal essentially cost-free to the government.

Peter Navarro — a public-policy professor at the University of California, Irvine, and an adviser to Trump — wrote on his personal website that, “For infrastructure construction to be financeable privately, it needs a revenue stream from which to pay operating costs, the interest and principal on the debt, and the dividends on the equity… The size of the required equity cushion will, of course, vary with the riskiness of the project. However, we are assuming that, on average, prudent leverage will be about five times equity. Therefore, financing a trillion dollars of infrastructure would necessitate an equity investment of $167 billion, obviously a daunting sum.”

To encourage investors to commit such large amounts, and to reduce the cost of the financing, government would provide a tax credit equal to 82% of the equity amount, Navarro wrote.

What Trump and Navarro are proposing is a tax break-for-investment scheme that will essentially create thousands of public-private partnerships to finance the projects. Experts and industry officials say there are limits to how much can be done with private financing because privately funded projects need to turn a profit. These experts say they are better suited for major projects such as toll roads, airports or water systems and less appropriate for routine maintenance, such as repaving a public street.

That’s fair criticism, but also evidence of how reliant the construction industry has become on direct, federal financing. PPPs have been successful on major underground sewerage/storm drainage and department of defense projects. The PPP model concentrates responsibility and control over all phases of the asset lifecycle and, therefore, has an advantage over traditional practices because it creates a lot of economies of scale and efficiencies. By aggregating a full construction program plan for infrastructure design and replacement, it’s far more easily financed than smaller piecemeal projects such as the road paving projects mentioned above that often are only possible to finance through municipal budgets.

Isn’t basic maintenance what we have municipalities and local budgets for in the first place? Sure, there will be some interstate highways that just need basic maintenance but many are in such bad shape — and haven’t been updated in so long — that widening or rerouting could qualify them as “big” projects. The Trump plan, like much of what the president-elect does, follows the Daniel Burnham adage, “make no small plans.”

It’s big — huge, really — and will focus on interstates, airports, underground water/wastewater, military infrastructure and less on simple maintenance. Investors will be drawn to the bigger projects and the simpler ones will be left to states and municipalities who will have the funding burden of new taxation passed on to them as well. Historically low interest rates have made it very cheap for state and local governments to borrow directly on the municipal bond market.

The 2013 American Society of Civil Engineers Infrastructure Report Card shows that the U.S. has a significant backlog of overdue maintenance across our infrastructure systems but also a pressing need for modernization. Most modernization projects would qualify as large infrastructure investments and fit the bill for the Trump/Navarro PPP plan. Smaller routine maintenance would be delegated to the states and municipalities.

What IS very unclear is how Trump’s proposal would generate enough new revenue to offset the cost of the tax credits. If the construction workers hired on the new projects were previously unemployed, the proposal would indeed generate significant new tax revenue. The problem with that is the unemployment rate for construction workers around has fallen to around 5.7%, so it’s likely those workers would have found other jobs anyway.

The projects might need to offer other employment incentives to entice enough workers… which would increase their overall cost above estimates. It’s still early, but any completely privately financed infrastructure plan would face significant market hurdles.

PREVIOUS POST:
In India, Glass-Reinforced Plastic Fights for a Foothold in the Rebar Market
NEXT POST:
Your Suppliers Need to be Prepared for the Digital Economy: Webinar Tomorrow!