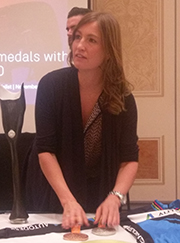 Schindler, a native of Germany’s Bavarian region, had her right leg amputated below the knee after she was in a tram accident when she was three years old. She took up competitive cycling at 18 (she’s now 30) and has been racing at the top level for the last six years.

She won silver in the women’s road race at the London Olympics in 2012. At that Olympics, Schindler wore a carbon-fiber racing leg on her residual limb that cost $12,733.20 (€12,000) to produce and… it still didn’t work right. She got a large abrasion that caused her a great deal of pain during competition even though she was able to finish all of her races.

Lighter, But Stronger and More Malleable

The answer was a polycarbonate prosthetic with a lighter, web-like “smart lattice” structure that Schindler spent two years working with Paul Sohi — an Autodesk engineer, maker and start-up evangelist — on designing and 3D printing with Fusion 360. The resulting limb, the “Real Leg Racing Leg” only cost about $2,652 (€2,500) to produce and, thanks to rapid prototyping and 3D printing, was tested much more extensively with design iterations simply created via “printing” iterations of it. It fit much better than the carbon-fiber, traditional manufacturing process one. Schindler was the first person to compete in an Olympics with a 3D-printed or additive manufactured prosthesis.

“We were able to perform stress analysis on the most delicate areas of it,” Sohi said. “We radically removed a lot of weight via smart lattice. It was as strong as the carbon fiber one but lighter. “We always applied way more force than what’s necessary to the side of it just in case of a crash.”

The Racing Leg weighed in at less than two pounds (a svelte 812 grams) and was manufactured from beginning to end in 48 hours. The actual printing of the final prosthesis took less than half that time. 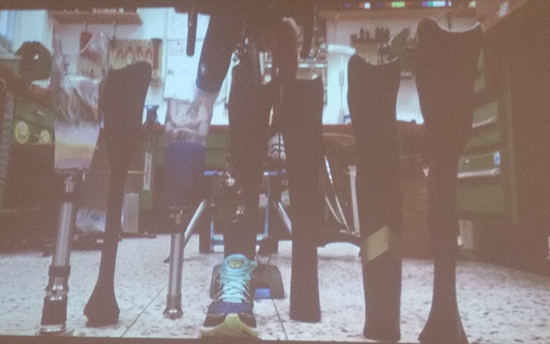 Although it has high impact-resistance, which Schindler insisted on in case of a fall on the tight and steep Rio course, it can be formed with heat for a better fit on a residual limb. Polycarbonate is one of the few thermoplastics that can be processed and formed at room temperature using sheet metal techniques, such as bending on a brake. It can also be heated with a heat gun to form and fit better, which is what actually happened when Schindler put on the Racing Leg.

In areas where it touches her body, there is room for flexing built into the latticework design. In areas where it needs to power the bike, there’s not as much flex or give and a stronger, tighter structure.

How to Additive Manufacture Artificial Limbs

Schindler did not suffer any abrasions from her new racing prosthesis in Rio and won another silver medal in the women’s cycling time trial and a bronze in the road race, yet beyond winning on the course, she said the experience with her new prosthesis has more implications for the manufacturing process of artificial limbs and how it can change the lives of fellow amputees. Right now, she’s working with Sohi on a new walking leg. 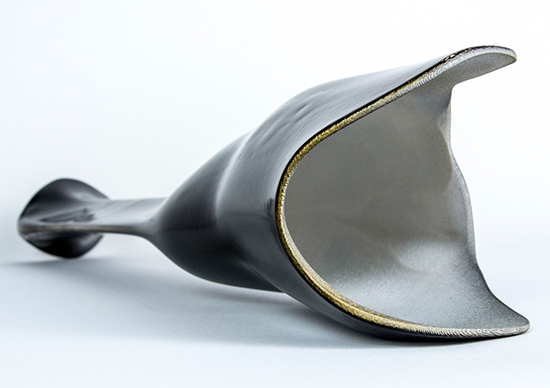 “People want an everyday walking leg that is wearable technology and not a medical equipment device,” she said, remarking on how before 3D printed, time with a prosthesist and molder greatly limited the options of a what an amputee could ask for in a prosthesis. Orthopedists and prostheticians are seeing their numbers fall as fewer people get into the procession while the number of people who need prosthetics is going up. A problem that only manufacturing can solve.

“It’s crazy how our behavior and the way we look at ourselves has changed in just the last 10 years,” she said. “It’s just a disability if there’s something you can’t do. If you can do everything you could do before, and technology is allowing us to do that, then you want to express that you feel that way and show how you are able to do all of this.”

To that end, Schindler said she does not want a walking prosthesis that looks like a cosmetic version of a human leg when she wears skirts or dresses. She is entirely comfortable showing that she has a prosthesis and she enjoys using it to express her individuality. She had gold stripes put onto the black background an earlier version of her racing leg because, not only are they are two of the colors of Germany’s flag, but because they are her favorite colors.

PREVIOUS POST:
The Aluminum Bull Market: Why You Should Buy Now
NEXT POST:
Have Copper Prices Peaked? Was the Recent Spike Mere Speculation?