Driven by the same dynamics pushing steel prices higher in North America, the Asian market has seen price announcements this week suggesting that the trend will remain upward for the rest of this year.

Tokyo Steel Manufacturing Company limited announced this week it would raise the prices of all its products by $45.12 per metric ton  (¥5,000 per mt) for December delivery. According to Reuters, the flat increase means product prices of Japan’s top electric arc furnace steelmaker will rise by about 7 to 11% in December, depending on the product.

This is the company’s first across-the-board price increase since May and comes on the back of flat prices in November and a 13% reduction in October. The firm announced that firmer product prices in the market allowed the company to recoup higher scrap metal input costs. TSM is often followed by South Korea’s steelmakers POSCO and Hyundai, and China’s Baoshan Iron & Steel (Baosteel).

The Economist recently reported that researchers at the Hong Kong Institute for monetary research calculated that the correlation between Chinese producer prices and those of the most Asian economies is very high.

In the region of 0.7 to 0.9 with one being a perfect correlation. So, it’s not surprising to see that Chinese steel prices have also been rising, up nearly 50% this year. Production fell in 2015 for the first time in decades, but it’s now up again, the paper reports. Steelmakers have made a strong recovery this year on the back of a recovery in the Chinese residential construction market.

Some also suggest the successful implementation of Beijing’s target to cull 45 million metric tons in steel capacity has improved utilization and margins. In reality, much of the capacity cuts announced so far were among plants that have already been idled. Profit margins in China I’ve been diverging since the summer with flat-rolled products generally performing well but long products consumed in the construction industry not performing as well as this graph from Platts shows. 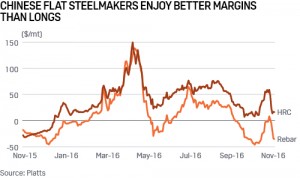 Whether this is an early indication of a wider slowdown in the housing construction or market whether it is a more the start of the seasonal winter slow-down in construction remains to be seen. But TSM’s across-the-board price increase suggests rising raw material and firmer finished steel prices are floating all boats in other parts of Southeast Asia rather than just the flat-rolled market, so steel makers are not surprisingly expecting prices to remain supported into 2017.

PREVIOUS POST:
Boeing and State of Washington Lose WTO Subsidy Case
NEXT POST:
Lead Prices Hit a 3-Year High, Did You Miss It?