Just when it all seemed to be going so well in in Europe, another potential crisis looms.

Italy will hold a referendum on Sunday on whether or not to change the country’s constitution. The country’s center-left Prime Minister, Matteo Renzi, has promised to resign if the electorate rejects his proposals. At stake is political turmoil as Euroskeptic comedian Beppe Grillo’s Five Star Movement (M5S) is just a few percentage points behind the Democratic party in the polls.

Meanwhile, the global financial crisis saddled Italy’s banks with around $384.4 billion (€360 billion) of bad debt and there is no good solution to a growing bank crisis. 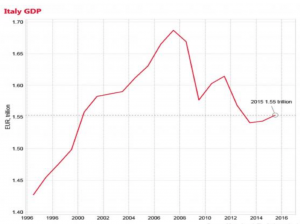 Unfortunately for Italy, new E.U. rules forbid governments from bailing out banks. Instead, they demand that shareholders and bondholders be what the Economist terms “bailed in,” forcing them to accept any losses that would otherwise be picked up by taxpayers.

Worse, in Italy bank debt worth around €170 billion is in private hands and it seems unlikely that in the current climate any Italian government, let alone M5S, would stand by while voters lost their savings. They may be tempted, therefore, to ignore the E.U.’s rules and rescue Italy’s banks, causing a split with Brussels.

After Greece, Italy is earning the title of the sick man of Europe. Growth has not just stagnated but fallen and populist policies will not solve the economy’s long-term challenges. 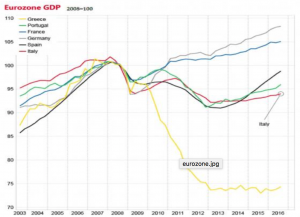 Italy is far from alone in feeling the effects of the populist wave sweeping across western politics. In Italy, as in the U.S. and the U.K., the electorate is feeling empowered to vote against things they don’t like rather than necessarily voting for an uncomfortable reality.

The five-star movement has said it would hold a referendum to decide whether Italy should leave the Eurozone, looking at what the E.U. has done to Greece, who could blame them? After the U.K.’s decision to leave, should another large and economically important economy like Italy decide the same it could herald the breakup of the single currency.

What Happens if Italy’s Vote Fails?

In the short-term, if the referendum is lost, analysts warn it could initiate a renewed and heavy sell-off of Italian bank stock. In addition, the Italian government bonds could be heavily sold driving up the government’s costs. The Italian bond yields, which move in the opposite direction to prices, have already been rising since the summer according to the Independent and are now back to about 2%. Far from critical, but the rise is indicative of growing investor concerns. 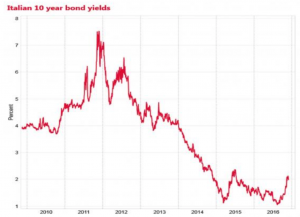 If Renzi wins, it would strengthen his hand to push through constitutional reforms to cut the costs of politics by reducing the number of senators, mayors and regional councils, and speed up lawmaking. All of which would be good for Italy’s long-term prospects, but even a win will only buy him 12 months until the next general election in 2018, by which time, if growth hasn’t returned, Grillo’s populist message may be resonating even more strongly with Italian voters than it is now.

Much hinges on this Sunday’s vote.

PREVIOUS POST:
Week-in-Review: Don’t Get Trampled By This Bull Market
NEXT POST:
They Took Our Jobs! Is Globalization Really to Blame for Job Losses?