Week-in-Review: Don’t Get Trampled By This Bull Market

Zinc, lead and tin all hit multiyear highs this week and the Organization of Petroleum Exporting Countries finally agreed on a production — with its own members and Russia — to cut back production so oil prices are up, too.

We were already in a metals and commodities bull market before the beginning of the week but it’s now more like a bull stampede. They’re even running in India. Lead Forecasting Analyst Raul de Frutos notes that this bull market is particularly unusual because it coincides with a strong U.S. dollar. Since commodities are valued in dollars it’s odd that they’re both up — and rising — at the same time.

MetalMiner co-founder and editor-at-large Stuart Burns also chimed in with vexing information, noting that tin is up while there seems to be abundant to robust supply of the stuff in the Earth’s crust with stable nations and reliable companies set to mine it. 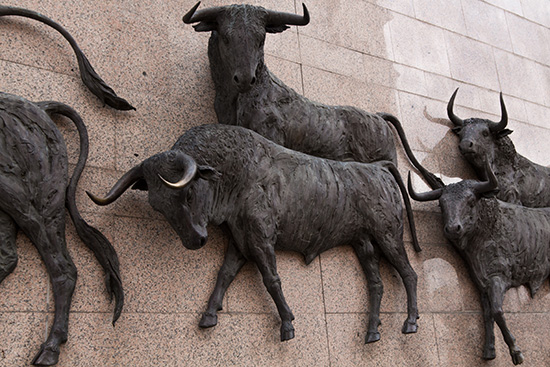 Don’t get stuck under these guys in the rush to get into this market. Source: Adobe Stock/Kyrien.

So, supply and demand aren’t fueling tin’s rise and that’s likely true for other metals as well. “New money,” as they say, is flowing into metal markets as investors are excited about Chinese construction demand and the prospect of a still nebulous $1 trillion infrastructure plan here in the U.S. China is, once again, driving the demand boat as the U.S. consumes only about 8% of commodities worldwide and the People’s Republic consumes the most.

So, metal bulls are driving the price surge truck more than following it. The dollar and commodities will have to part ways at some point, but which one will fall? And when? We’ll let you know as soon as any credible signs form.

Meanwhile, more anti-dumping duties got imposed on imports of foreign cut-to-length steel plate, this time Brazil, Turkey and South Africa. Some of the dumping duties are as high as 94%.

It was an equally bad week for the U.S., though, when it comes to international trade. A subsidy paid by Washington state in the form of tax breaks to Boeing for keep an assembly plant there was found to be a countervailable subsidy by the World Trade Organization in an unusually high-profile dispute. The European Union rallied around Airbus in fighting the subsidy and appealed it all the way to the WTO. That pitted the powerful economic bloc and one its biggest corporations, Airbus, against an equally prosperous and powerful nation with just as many trade agreements in the U.S. and one its major employers, Boeing.

With President-elect Donald Trump promising to crack down on foreign corporations, illegally dumped products and jobs exported overseas, this could be just one of many future WTO spats where the big boy nations get out on the legal field and play rough. It was reported that Trump used the carrot of federal contracts, this week, to keep a Carrier plant in Indiana from taking its 1,000 jobs and moving to Mexico. Could such nudges be used as proof of subsidies in future WTO disputes? We’re about to set sail for interesting times.