In much the same way as President-elect Donald Trump conducted his election campaign, he has kept himself very much in the headlines in the interim period until he takes charge as president in January.

Trump won by promising infrastructure investment and that he’d protect American manufacturing jobs. What’s that mean for American steel? The two were seen by many as mutually supportive.

How will this promise actually translate in practice? The FT suggests there are four main policies that he can pursue to boost the steel industry. The first, the newspaper suggests, is an easing or simplification of federal regulations, support for which is highly probable from a Republican-controlled Congress, but the benefits while helpful would not be transformational.

The second option is cutting corporate taxes. While this would not be of direct assistance to some of the largest steelmakers such as U.S. Steel and AK Steel that have not paid corporate income tax due to losses, if it helps boost growth in the economy it may indirectly have some benefit for steelmakers. Again, Congress is likely to support this.

The third policy option, and the one that dovetails with his campaign pledges, is the promise of a $1 trillion dollar investment in U.S. infrastructure. If realized, this investment to rebuild highways, bridges, tunnels and airports could boost steel products used in the construction industry. The FT suggests $100 billion a year of infrastructure spending could increase U.S. steel consumption by 6%, if this was supported by a vigorously applied Buy America program it could be particularly beneficial for producers of steel long products such as rebar.

Although his promises of Infrastructure investment have met with widespread enthusiasm, there has also been some resistance from Republican leaders in Congress, intellectual conservatives who believe in free trade are worried about a large increase in government spending when the budget is already in deficit. The new president is likely to have a fight on his hands getting this through Congress and his $1 trillion headline-grabbing figure may well have to be compromised for the plan to get approval.

The fourth and probably most contentious of Trump’s promises is to block imports of low-priced steel, particularly from China. Chinese overproduction is a global problem that the U.S., Europe and, indeed, all steel-producing markets are struggling to cope with.

The FT reports that in the U.S., the market share taken by imports rose to a new record high of 29.1% last year up from 20.9% in 2010. As the article observes, Dan DiMicco, former chairman and CEO of steel producer Nucor Corp., is the head of Trump’s transition team for the U.S. Trade Representative’s office.

The new president means business in terms of a significant shift in policy regarding imports. Ironically, the steel producer that has reacted most effectively to the threat of steel imports is Nucor. In the face of intense competition from imports, the firm has invested and innovated, improving efficiency and reducing the cost of production such that Nucor, today, is better able to cope both domestically and internationally than any other steel producer in the U.S.

The impact president Trump’s election win had on the share prices of steel producers underlines the markets’ recognition of this fact. Shares in Nucor were up 24% while those of U.S. Steel and AK Steel were up 61 and 64% respectively. 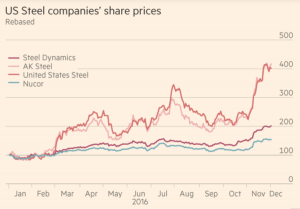 The stock market, though, may be getting a little ahead of itself. There will be a great deal of wrangling in Congress before we know how much the new president will be able to realize his infrastructure ambitions, and a significant escalation of anti-dumping activity may incur opposition through the World Trade Organization that would slow or limit potential action. Even so, the direction is clear. The new president is putting America first, and who can blame him for that?