Will Steel Prices Rise Under a Trump Presidency?

His promises have been generally well-received yet they raise an awkward question: Creating demand and limiting supply — first by rolling out steel-consuming infrastructure projects and second by taking more aggressive action against steel imports — will inevitably raise domestic steel prices.

This would be good for domestic U.S. steel producers, in as much as construction companies could pass along the costs infrastructure projects, it would incur only marginally higher input costs as a result paid the taxpayer. But it would inevitably also have a wider impact on the steel market, rising prices for steel consumers and higher prices, in turn, for the wider population buying automobiles, refrigerators and other products manufactured with any significant steel content.

How We Got Here

The U.S. steel industry has suffered grievously at the hands of cheap imports. Steel dumped by producing countries with a massive overhang of spare capacity and hidden subsidies such as China have depressed prices and pushed many major producers such as U.S. Steel into loss-making positions that resulted in downsizing and the loss of jobs.

Ultimately, the impairment of the domestic steel Industry is not in the interest of shareholders, consumers or the wider economy. So, action needs to be taken, the question is how will the new president’s policy promises be applied and how will the interests of the steel industry be balanced with those of the consumers?

There is a danger that the benefit of the few, the steelmakers, could take priority over those of the many. Steelmakers and the steel-producing producing industry are made up of a relatively small number of large corporations who are well organized and act with some level of coordination to achieve their aims.

Steel consumers, on the other hand, are an extremely diverse group spread across metal-consuming companies and the markets they serve. By contrast, the impact of actions that limit imports or influence import costs may be individually small but collectively large for the wider economy. The impact on the economy of higher steel costs could be significant, raising prices for consumers and reducing the ability of U.S. manufacturers to compete on exports of finished goods.

Despite the arguments in favor of free trade and the trend this century for increasing trade openness, protectionism is still widely practiced and, indeed, has a place in a country or regional block’s economic policy.

The European Union, for example, has a policy of agricultural protection because it considers the domestic production of food a strategic resource, likewise steel can be considered a strategic industry and be deserving of some level of protection from unfair competition. Chinese low-priced steel may be a transitory phenomenon, but if the U.S. steel industry was decimated over a narrow time frame and then cheap imports dried up it could be argued the country would be at the mercy of imports in a potentially much tighter future market, not an outcome any of us would recommend.

Which Option is Better

The question is what action is preferable and most fair for all, producers and consumers? Anti-dumping or countervailing duties that penalize imports such that they are priced at a comparable level to domestic steel producers make a lot of sense. Even major consumers such as the automotive industry, that have long-demonstrated a commitment both to free trade on the one hand and domestic steel on the other, will favor domestic suppliers if the price is comparable.

A problem could arise if duties of 100% or more are applied, putting imports so far above the real cost of domestic production that domestic steel producers simply lift prices in a market bereft of any real foreign competition. Steel prices in the U.S. are already generally higher than elsewhere as this graph from The Steel Index illustrates. 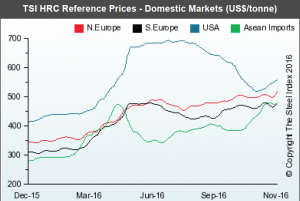 TSI says that part of the reason prices are higher in the U.S. is due to previous quotas/duties against steel imports.

If you accept the need to control imports or import prices, then an alternative model is setting a floor price for major imported steel products such as hot-rolled coil, cold-rolled coil, plate, and bar products. India did that this year in response to Chinese imports and has recently extended the floor price for another two months.

The problem is that all importers benefit from the higher prices. The price must be set sufficiently high that domestic producers are under that level and deprive importers of market share. But who decides what the floor price should be? Who watches the watchers, if you will? As raw material prices vary, who decides how that floor price should rise or fall.

So far, the industry has favored anti-dumping actions, probably because it is the easiest to argue and does not require collective agreement across the wider industry, there is a legal framework in which to work and, as such, it would be the easiest mechanism for the new President to beef up. It is also the most specific in terms of targeting individual producers or countries while leaving imports from other suppliers unimpeded.

The debate, though, is a valid one, for the reasons stated steel producers deserve protection from state-subsidized or unfair competition, but there is a price to be paid by the wider economy if prices rise further than is necessary to maintain a fair market. It’s how we achieve that state of nirvana that we should talk about, what do you think?