So, an unprecedented coming together of the Organization of Petroleum Exporting Countries and non-OPEC oil producers has finally created the circumstances in which oil’s price decline has been reversed and sustainable higher prices assured.

According to Oilprice.com, NOPEC producers have agreed to cut 558,000 barrels a day and OPEC producers will cut 1.2 million bpd. Saudi Arabia will take the biggest hit, cutting 486,000 bpd. Russia will contribute 300,000 bpd to the total NOPEC production cut.

All this amounts to is 2% of global supply, the article reports. Azerbaijan, Oman and Mexico will also contribute, reducing production by 35,000, 40,000 and 100,000 bpd respectively, although it should be said Mexico is suffering a slow and steady decline due to reservoir depletion and would struggle to maintain current output next year anyway.

We should all, therefore, be expecting higher oil prices in 2017, right? Maybe not. We have, after all, been here before.

Agreements signed in the early 2000’s collapsed due to the inability of OPEC members to keep to their commitments. There is a growing anxiety that if this agreement does not result in higher oil prices and the global stockpile does not reduce, then Saudi Arabia and Russia, in particular, could revert to full production.

The oil price.com article quotes former Saudi oil minister Ali al-Naimi who commented at a recent Washington symposium that OPEC members “tend to cheat” and therefore any tangible results from this latest agreement “remain to be seen.” With severe pressure on fiscal budgets, both Saudi Arabia and Russia would be tempted to cheat if they did not see tangible benefit, that is a rising price, resulting from their respective cutbacks. 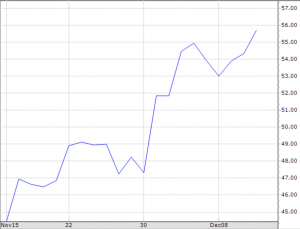 Over the last month, the price has risen strongly as the prospects of the deal have improved but, after the initial euphoria, prices eased back a little this week as anxiety grew over whether the participants would stick to the deal.

Inventory continues to build at Cushing and the Energy Information Administration’s short-term energy Outlook released last month is not supportive for continued price rises during the next year, saying. “EIA forecasts Brent crude oil prices to average $43 per barrel (b) in 2016 and $52/b in 2017. West Texas Intermediate (WTI) crude oil prices are forecast to average about $1/b less than Brent prices in 2017. The values of futures and options contracts indicate significant uncertainty in the price outlook.”

So, the short answer seems to be a continued rise in the oil price off the back of this agreement is dependent on the price of oil continuing to rise all by itself. The extent to which consumers feel the need to hedge their exposure into 2017 will depend on the level of that exposure and the nature of their business, but just because OPEC and NOPEC producers have managed to reach an agreement with the aim of supporting prices, it does not automatically follow that they will continue to rise much above current levels during next year.