Following Russia’s military success in their support the Syrian regime, you could be excused for thinking Western sanctions, applied in 2014 in response to Russia’s annexation of Crimea, have had little or no effect on the country.

Certainly, they seem to have had little impact in altering or encouraging a change in behavior but there are examples in which the sanctions have had quite a profound effect on the economy and particularly on certain industries.

A recent article in the Financial Times explores the challenges Gazprom Neft is facing in trying to exploit Russia’s vast shale gas reserves without the benefit of Western partners. Following the imposition of sanctions Western oil and gas companies withdrew support from any projects to exploit shale reserves requiring fracking technology, and as a result firms like Gazprom Neft, the oil division of state-controlled Gazprom, have been forced to go it alone in developing the technologies and practices necessary to exploit shale rock containing oil and gas resources. 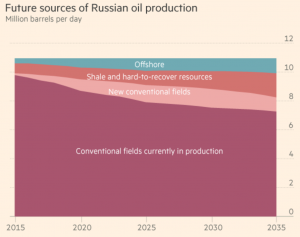 Progress has been slow, in spite of the huge potential. As Russia’s hydrocarbon resources dwindle from their peak in Soviet days, the country is sitting on vast shale resources rivaling the U.S.

Resources Russia needs to develop if it is to maintain output critical to government revenues and the wider economy. 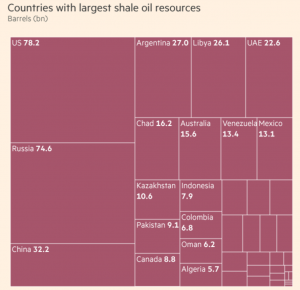 According to the FT, at 75 billion barrels, Russia’s enormous Bazhenov formation in Siberia is estimated by the U.S. Department of Energy to be the single largest deposit of shale oil in the world.

Russia is currently managing to maintain conventional oil output at the post-Soviet record of 11.5 million bpd, but without being able to supplement supplies from shale formations this will be progressively harder to maintain. Russia is challenged on several fronts; a low oil price is not helping the economics of tight oil production but even allowing for breakeven prices, Russian technology is five or more years behind that of the U.S.

The main limiting factor, though, is the supply of high-technology equipment, shortages of kit for multistage fracking, pumps and well completion systems previously supplied by western oil majors or their contractors like Schlumberger and Hess.

While trying to develop their own technology Russian oil companies are also trying to obtain know how and access to technology via the backdoor. International sanctions, apparently, do not apply to “hard-to-recover” resources. Such resources were previously described as shale before 2014 but, according to the FT, energy companies both in Russia and overseas have been more careful with their language in recent announcements to sidestep accusations of sanctions busting.

Statoil has redefined its involvement in the Domanik shale formation” in the Volga-Urals basin to refer to it as “the limestone Domanik formation.” In the current seemingly, at least, pro-Putin/pro-Russian Reset stance of the incoming Trump administration, it is less likely this loophole will be plugged than it may have been the Obama administration, allowing the Russia to catch up with equipment technologies and drilling practices.