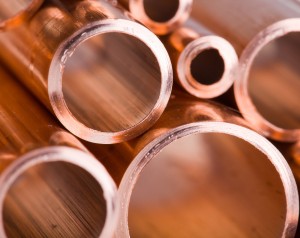 Set of copper pipes of different diameter lying in one heap

According to a report from MarketWatch, copper for March delivery grew 2.9% on the Comex division of the New York Mercantile Exchange last Tuesday, which was the largest one-day increase in nearly two months.

“The 2017 growth rate was supported (by) much faster than expected project ramp ups in Peru in particular, and much lower than statistically normal rates of production losses through the year,” Citi wrote, according to the news source. “We believe both of these factors will be difficult to replicate in 2017.”

Overall, a weaker dollar was supporting metals and, in the short-term, a reduction in copper stocks in LME warehouses indicates a tighter market, which could further boost prices.

Copper Bounces Back from December

Our own Raul de Frutos wrote recently that copper prices declined some in December, along with other industrial metals, but the bull narrative is still in effect:

“The recent price decline in copper prices wasn’t that dramatic. So far, it seems like the bulls are still in control. A strong dollar and a possible slowdown in Chinese demand are factors that could bring prices down. Up until now, China’s demand looks strong and the dollar hasn’t had a big impact on metal prices. Therefore, we need actual reasons to turn bearish on copper,” he wrote.

How will copper and base metals fare in 2017? You can find a more in-depth copper price forecast and outlook in our brand new Monthly Metal Buying Outlook report. For a short- and long-term buying strategy with specific price thresholds: