Or at least if that wasn’t the intent, it’s likely how the smelters feel.

In an about face on Indonesia’s 2014 export ban across a range of minerals, Energy and Mineral Resources Minister Ignasius Jonan said this week that local miners might be allowed to export up to 5.2 million tons of low-grade nickel ore a year, partially reversing the ban intended to force buyers to set up value-add refining facilities in Indonesia.

The export ban has been relatively successful. Export volumes, of course, plummeted from about 60 million metric tons before the 2014 ban was enforced but new refineries have been set up and refined volumes of value-add material have increased.

Therein lies the problem. Those investors are not unreasonably perturbed. They would like to know why, after they were forced to invest millions in new plants, the government is now considering allowing ore exports again. Many refiners are threatening legal action, they are so incensed.

Virtue Dragon Nickel Industry, a unit of China’s De Long Nickel Co. Ltd., has invested up to 7 trillion rupiah ($525 million) to build smelters in Indonesia, but it’s putting on hold a further expansion plan worth 25 trillion rupiah due to the policy shift, Reuters reports.

The move sent shockwaves through stainless steel and nickel miners’ share prices and the nickel price did a fair approximation of a roller-coaster as this graph form the London Metal Exchange illustrates. 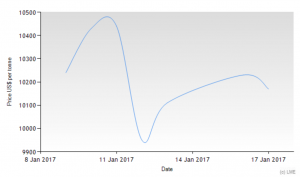 The recovery was created in part by moves by the Indonesian authorities to assure the market they were not going to approve unrestrained exports, saying only those companies that had demonstrated progress in construction of smelters would win export permits — with exports restricted to amounts that corresponded with smelting capacity.

The intent seems now to be to allow nickel miners to export providing they dedicate at least 30% of their smelter capacity to processing low-grade ore, defined as below 1.7% nickel. They can then export any excess capacity they have. That said, this move means that up to 70% of Indonesia’s nickel production capacity could potentially be put on the market, which would be equivalent to around 14% of global capacity.

Indonesia is the sixth-largest producer in the world, with a 6% market share and although it is dwarfed by The Philippines, Canada and Russia who are the most important producers with a combined market share of 45%, it is an important supplier to the Chinese stainless steel industry.

Western stainless steel producers have also lambasted the Indonesian move. Acerinox went so far as to say the move is very negative and will push down stainless prices as it depresses alloy surcharges. Their fear is the supply chain will stop forward buying if they perceive surcharges are going to come down, derailing price hikes the Spanish firm had hoped to push through in the traditionally strong first quarter.

Quite how negative relaxation of the export ban will be depends on the interplay of several factors. First, just how much low-grade ore is approved for export, second the degree to which the market remains tight due to constraints among Indonesia’s rival suppliers. Malaysia has problems and in The Philippines the new fiercely environmentalist campaigning Environment Secretary Regina Lopez has cancelled six mine permits, as part of a clampdown on the industry over environmental concerns at the world’s largest nickel ore supplier. So, Indonesia’s move, despite the shudders it has sent through the markets, may not prove to be the end of nickel’s year-long bull run.

PREVIOUS POST:
Industrial Automation: You Cannot Stop The Rise of the Machine
NEXT POST:
Trump’s Desire for a Weaker US Dollar Brings Upside Potential to Metal Prices