Home | Commodities | Week in Review: Pipelines, Walls, Infrastructure… Why Not a Monorail?
Commentary

Week in Review: Pipelines, Walls, Infrastructure… Why Not a Monorail?

This week, the new Trump administration issued a series of executive orders that revived the Keystone XL and Dakota Access pipelines, one that required only American-made steel in all pipeline projects and even created a council of manufacturing CEOs, trade organization and union leaders. 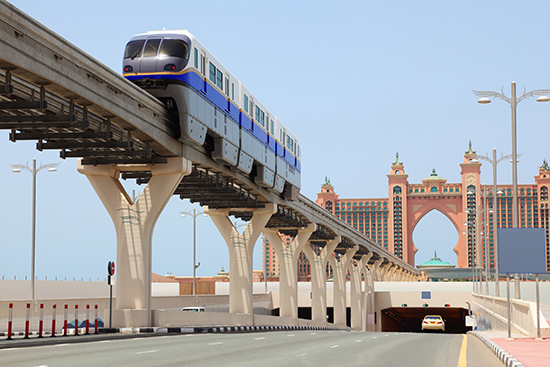 If the Atlantis Hotel in Dubai can have a monorail why can’t San Diego and Tijuana? Source: Adobe Stock/Pavel Lasevsky.

Since trade, manufacturing and infrastructure are playing such a key role in this presidency, and Trump campaigned his way into office saying they would revive our economy and deliver better deals and more prosperity… why stop at walls and pipelines?

A pipeline is one long metal tube, after all? Yes, we are calling for monorails. Monorails as far as the eye can see. A country with(out) money is a little like a mule with a spinning wheel, after all. It’s not more of an Oracle, idea, either, for those of you who have come from our sister site, SpendMatters.

Here’s my thinking: once that wall across the Southern border is done, we’ll need some way to get guest workers and highly taxed imports across the border. Why not a bona-fide, electrified, six-car monorail from Tijuana to San Diego and back? Or Brownsville to Matamoros? If we’re adding 20% import taxes, after all, the goods that come across could pay for the construction of the wall and the monorail it comes in on.

President Trump says his infrastructure plan will include ports, airports, railways and highways, adding a few monorails can’t up the price that much. Just add .3 to the existing $1 trillion bill. Manufacturing and trade are going to be the engines of our economy, after all, so why can’t the engines be mag-lev?

PREVIOUS POST:
Trump Creates Manufacturing Jobs Initiative; Arconic, Nucor on Board
NEXT POST:
Is a Trade War With Mexico Good for US Manufacturing?