When it comes to providing stimulus to meet growth targets, you can’t bet against China. But when it comes to cutting output, things can get obscure… literally.

According to a new report by Greenpeace East Asia and Custee a Chinese consulting firm, China’s steel capacity in 2016 actually increased and not decreased despite the very public announcements of capacity curtailments. According to the report, 73% of the announced cuts in capacity had already been idled and therefore, not actually in operation. Steel capacity curtailments may have only involved 23 million metric tons of capacity that had been in operation.

Production Up, Prices Up 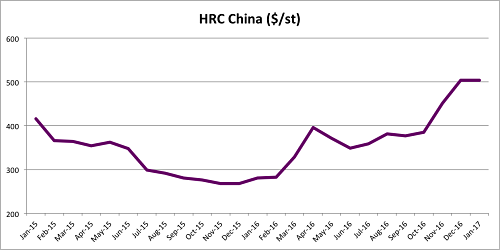 After falling in 2015, Chinese crude steel output is now rising again at a healthy clip — it was up 4% on the year in the fourth quarter. Meanwhile, hot-rolled coil prices in China rose near 70% for the year. Despite resilient output, demand growth has been much more significant. As a result, Chinese steel exports have fallen double digits for four consecutive months.

Sentiment in the steel industry is also bullish thanks to expectations of lower output this year. In January, China promised some major shut downs of low-quality steel by June of this year.

Eliminating excess steel capacity and restructuring the industry has enormous environmental significance because the steel industry is the second-largest emitter of air pollution in China. This is another reason to believe Beijing will strengthen its supply-side reforms this year.

These numbers give us reasons to doubt on what China can deliver this year. China is now under pressure to demonstrate progress on capacity cuts. But financial and legal incentives to keep marginal firms running will cause regulators to struggle to enforce capacity cuts. Chinese steel mills are so hard to get rid of as they are often a key source of local tax revenue and employment.

The sustainability of the ongoing rising trend in steel prices will much depend on China. Buyers will need to keep a close eye on how much growth can China deliver and how much of the promised production cuts will actually materialize this year. The problem is that growth without controlling steel out will only translate into severe air pollution.