The S&P 500 index, a broad measure of the performance of large U.S. companies, climbed 6% since election day. Wall Street has not posted such a strong run from a president’s first-term election win in more than half a century, when the S&P 500 climbed more than 8% after JFK beat then vice-president Richard Nixon. 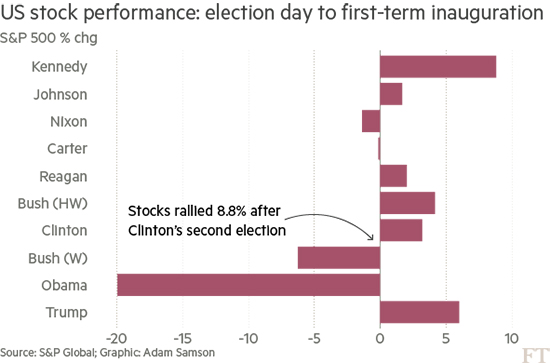 Stock market performance since election of a new US president. Source: Financial Times.

Over the same time frame, only the advance following Bill Clinton’s second election stands with JFK in topping the Trump run. Additionally, Wednesday’s fifth-straight record-high close for each of the major U.S. equity indexes matches a streak last seen in January 1992. The Philadelphia Federal Reserve Bank even said its manufacturing index soared in February to a 33-year high, in another indication of improving business sentiment in the wake of the Republican election sweep.

The Philadelphia Fed index surged to a reading of 43.3 from 23.6 in January. That’s the highest level since early 1984, on a scale where any reading above zero indicates improving conditions.

What’s Behind the Surge?

“Investors have fully bought into Trump’s promise to ‘make America great again’: activity will be stronger and trade deals more favorable to the US. Inflation and interest rates are heading higher,” Keith Wade, chief economist at Schroders, told the Financial Times.

Despite initial expectations from many investment firms that the Washington outsider known for his unrestrained and controversial rhetoric would set off a tumble for U.S. stocks, the outcome of the election heralded a change in stock market leadership.

The S&P 500 financials sector got a strong boost from the election amid expectations that Trump will loosen regulations, spark economic growth and reduce taxes. Those factors, which are bullish for banks because of their sensitivity to the overall economy, also inspired hopes that interest rates will begin to rise more quickly and the Federal Reserve has done its part on that front, with Chairwoman Janet Yellen saying on Tuesday that the central bank will likely need to raise the rates at an upcoming meeting in March.

“Waiting too long to remove accommodation would be unwise,” Yellen told the U.S. Senate Banking Committee, citing the central bank’s expectations the job market will tighten further and that inflation would rise to 2%.

Trump, himself, has even joined in, saying in a Thursday morning tweet, “Stock market hits new high with longest winning streak in decades. Great level of confidence and optimism — even before tax plan rollout!”

In a note out late last year, Barclays strategist Jonathan Glionna estimated that Trump’s corporate tax plan could add $180 billion directly to S&P 500 earnings. Trump promised during the campaign that “no business of any size, from a Fortune 500 to a mom and pop shop to a freelancer living job to job, will pay more than 15% of their business income in taxes.”

Reducing and simplifying corporate taxes would, no doubt, be a boon companies from mom and pops to Fortune 500 members, yet a bill still has not been drafted to deliver on Trump’s promises. Yesterday, Trump said that a “massive” tax plan was coming “in the not too distant future.”

If Congress can’t get it done quickly, could stocks pull back? It’s a possibility but with how they’ve gone since the inauguration waiting a bit longer could only cause more positive speculation, too. For manufacturers and metals producers, the lure of that 15% rate is simply too beneficial to not drive up stock prices. This is, of course, leaving out a border adjustment tax or any other taxes that might further benefit U.S. metals producers.

Has Trump inadvertently created a bull market in corporate income speculation? Or possibly advertently? Time will only tell. Until then, interest rates are likely go up, taxes can accurately be projected to go down and metal prices are climbing higher.