The LME Ferrous Monthly Update report for February reported there was steady uptake of both scrap and steel rebar contracts last year and that there was  a surge of activity in January, for both February dates and out to September of this year. LME Steel Scrap and LME Steel Rebar both traded record volumes last month. LME Steel Scrap traded the equivalent of 262,450 metric tons composed of almost 2,500 individual trades, the LME reports. 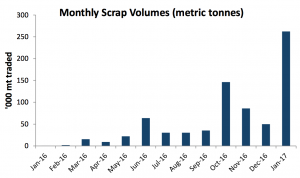 As volume and liquidity builds, the contract will become more representative of real market prices and as a result increasingly relevant as a viable tool. One measure of liquidity is the narrowing of bid/offer spreads. In a non-liquid market buyers and sellers are harder to find and spreads tend to be wider, but as volume has built market makers have been able to narrow the spreads reducing trading costs and increasing the attractiveness of the contract for hedging.

Two interesting trends are developing this year, the first is a longer-term divergence between short dated scrap and spot iron ore prices. Both U.S. and European scrap prices have fallen in January, while iron ore prices actually posted slight gains. The ratio of spot scrap prices to iron ore is now at its lowest since 2013, a trend that at some point is likely to reverse. 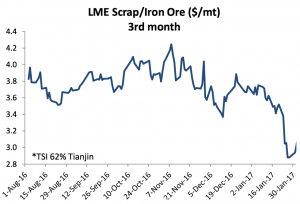 The other is a probably a much shorter term divergence between the LME scrap price and Turkish long products prices. Turkey’s electric arc furnace steel industry, source of much of its long products, is almost entirely dependent on imported U.S. East coast and European scrap, price levels for these products have fallen since mid-January as illustrated by both this Platts graph and the previous LME price graphs.

Diverging input costs and finished product prices are great for product producers but they rarely last. The demand that’s driving rising finished steel prices either drives demand up — and hence prices for the raw material, scrap — or lower input costs encourage producers to fight for market share by offering discounts. Either way, an arbitrage situation could be opening up and volatility in the LME’s rebar/scrap ratio could be an example of just such activity. 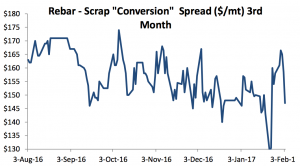 PREVIOUS POST:
Zinc is in a Record Deficit as Zinc Prices Near Record Highs
NEXT POST:
Lead Prices Will Trade at $2,800 By Year’s End