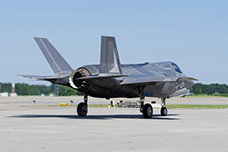 Even with record-large exports of corn and soybeans, typically a boon for shippers that haul grain to Gulf Coast export terminals, the collapse of coal shipments to the lowest levels in decades has left the dry bulk barge fleet chasing too little cargo.

In pursuit of rising grain volumes since 2014, many shippers expanded their fleets too quickly.

Barge lease rates paid to companies like Archer Daniels Midland Co.’s American River Transportation Company, privately held Ingram Barge and a handful of smaller operators are at 1-1/2-month lows and more than 30 percent below the five-year average for February.

President Trump will propose a federal budget that dramatically increases defense-related spending by $54 billion while cutting other federal agencies by the same amount, according to an administration official.

The proposal represents a massive increase in federal spending related to national security, while other priorities, especially foreign aid, will see significant reductions. How quickly that increase will turn into downstream metals purchases for defense contractors remains to be seen.

PREVIOUS POST:
Gold Prices Are up 9% This Year, Is This Rally Sustainable?
NEXT POST:
Iran Incurs the Wrath of Europe’s Steel Trade Body Eurofer