Chinese Aluminum Prices Face Threats Even as They Climb Higher

A recent article from news service Reuters raises concerns over the continued strength of the aluminum price.

Benchmark Your Aluminum Price by Grade, Shape and Alloy: See How it Stacks Up

Global aluminum prices have risen over the last six months, led by a strong rebound in the Chinese market. From a low of just over 9,000 yuan (electric town) in November 2015, the Shanghai price as risen steadily to above 14,000 yuan today as this graph from Thompson Reuters illustrates. 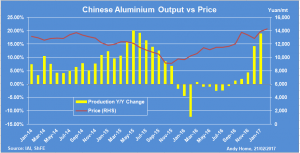 Spurred by healthy demand and the rising price, smelters have responded with gusto. As primary metal production in the rest of the world has fallen by an annualized 182,500 metric tons per year, output in China has surged. Although monthly figures are subject to considerable swings, Reuters reports January hitting a record of 2.95 million mt according to figures from China’s non-ferrous metals industry association. That is equivalent to an annualized rate of 34.7 mmt or 56% of global output, a staggering 19% year-on-year growth.

There are several factors at work here. Demand is certainly strong, although some of this rising production is making its way into warehouses rather than actual consumption. Prices are, in part, being supported by rising raw material costs particularly. According to Reuters, many precursor materials of aluminum smelting — such as coal tar, pitch and carbon anodes — suffered capacity curtailments as a result of environmental inspections last year instigated by Beijing as part of the central government’s concerted drive to reduce atmospheric pollution.

This focus is expected to be extended next winter when atmospheric pollution is at its worst to directly target aluminum smelters, steel plants and other heavy industrial processors who are contributing to atmospheric pollution. It has been suggested that the smelters current enthusiasm to operate at full capacity is in response to an expectation that restrictions next year will cause shortages.

At the rate that smelters are going and warehouse stocks are increasing, smelters’ enthusiasm may prove to be overly optimistic. Reuters calls a note of caution as to whether domestic Chinese prices will continue to rise in the face of such relentless overproduction. As the graph suggests, rising prices encourage rising production until a substantial surplus is reached at which point prices tend to fall followed in due course by cutbacks in output. Reuters cites JP Morgan Chase’s advice to clients to close out long positions in aluminum advising that both Shanghai Futures Exchange and open market aluminum stocks have risen dramatically in recent months.

Currently, the ShFE price is comparable to the London Metal Exchange spot price plus the physical delivery premium meaning Chinese semi-finished products produced for export are not operating at a significant disadvantage to competitors elsewhere. Should the Shanghai price fall, they could even be an advantage and under such circumstances we might see an increase in product exports even over last year’s 4.1 mmt. Not exactly music to the ears of downstream producers in Europe and North America, but a significant risk all the same.

PREVIOUS POST:
Zinc Price Forecast, February 2017: Supply Tight, Prices on the Rise
NEXT POST:
Gold Prices Are up 9% This Year, Is This Rally Sustainable?