U.S. Customs and Border Protection said recently that it plans to start awarding contracts by mid-April for President Donald Trump’s proposed border wall with Mexico, signalling that he is aggressively pursuing plans to erect “a great wall” along the 2,000-mile border.

The agency said it will request bids on or around March 6 and that companies would have to submit “concept papers” to design and build prototypes by March 10, according to FedBizOpps.gov, a procurement website for federal contractors. The field of candidates will be narrowed by March 20, and finalists must submit offers with their proposed costs by March 24.

Can I Get a Good Deal on a Wall?

The president told the Conservative Political Action Conference on Friday that construction will start “very soon” and is “way, way, way ahead of schedule.”

Homeland Security Secretary John Kelly has sought employees’ opinions during border tours of California, Arizona and Texas but it’s still unclear how Congress would provide funding, how much it would cost and when, exactly, construction could start. 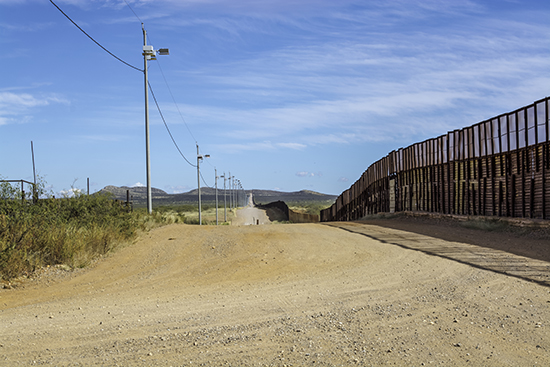 Republican leaders in Congress have said Trump’s wall would cost between $12 billion and $15 billion. Trump has suggested $12 billion. An internal Homeland Security report prepared for Kelly estimated the cost of extending the wall along the entire U.S.—Mexico border at about $21 billion.

Some of the possible general contractors mentioned as prospective bidders include Granite Construction Inc., Vulcan Materials Co. and Martin Marrieta Materials Inc. Kiewit Corp. built one of the more expensive stretches of fencing that exists today at a cost of about $16 million a mile, a project in San Diego that involved filling a deep canyon known as Smuggler’s Gulch. Strangely, cement and other construction materials provider Cemex SAB was also mentioned internally as a potential beneficiary even though it is based in Mexico.

During the campaign, Trump’s promise to “make Mexico pay for the wall,” in the few times it was articulated, centered on taxing cash transfers by Mexican nationals working in the U.S. The country’s largest source of cash comes from Mexicans living and working in the U.S. who send money back to both their families and their native hometowns which use the money for infrastructure improvements. The Mexican government openly encourages and financially supports the transfers because they build stability in deteriorating small towns. Electronic transfers and money orders are the most popular methods to send money to Mexico

For every Mexican peso provided by migrant workers, Mexico’s federal, state and municipal governments contribute an additional peso in what’s known as the “3×1” program. Migrants participate through clubs or federations duly registered at Mexican consulates in the U.S. and other countries, and pool their remittances.

“They will reimburse us for the cost of the wall. That will happen, whether it’s a tax or a payment… probably less likely that it’s a payment, but it will happen,” Trump said in January. Mexico collected $27 billion in remittances in 2016 so even a fraction of that could easily fund a border wall that would likely take years to build.

We wrote in August that taxing remittances was probably the clearest, easiest way to fund a border wall expansion. While it’s still certainly the easiest way to get Congress on board —no new taxes on citizens and a new stream of revenue for federal coffers would delight even the most pro-immigration lawmaker — it would greatly anger a trade partner, Mexico, which is already highly displeased by the new administration.

The Mexican peso tumbled to a record low beyond 22 per dollar in January after Trump’s pledges to end or renegotiate the North American Free Trade Agreement and impose tariffs on automakers rattled investors.

Mexican Finance Minister Jose Antonio Meade said on January 30 that ensuring the free flow of remittances is a priority for his government and laid out ideas to make greater use of technology and the nation’s development bank structure to facilitate them. If President Trump outlines any finance plan involving remittances in tonight’s address it will set testy U.S.-Mexico relations even more rapidly onto a collision course.