Just a few weeks ago, the future looked bright for the oil price. Back in November, the Organization of Petroleum Exporting Countries and a number of non-OPEC producers agreed to cutbacks intended to reign in surplus global oil stocks and, in so doing, support the oil price.

Initially, the agreement met with considerable success. Hedge funds and speculative investors went long on oil and the price rose. But, this week several comments and statistical reports coincided to remove some of that optimism and resulted in steep price falls. The West Texas Intermediate benchmark fell under $50 for the first time since December while Brent Crude was also down to $52.41 a barrel, its lowest level since November. 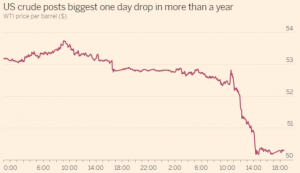 According to the Financial Times, Wednesday’s decline came after the Energy Information Administration said inventories of U.S. crude stocks climbed by 8.2 million barrels, far more than analysts expected, as refinery oil purchases declined. If the rise in inventory was solely down to refineries slowing or delaying purchases, the impact would not have been as dramatic but the fear among investors is U.S. shale production is roaring back.

Even Saudi Arabia’s oil minister, Khalid al-Falih, is quoted as saying OPEC’s agreement and the corresponding price increase has helped the U.S. shale market to recover and, perversely, undermined efforts to stabilize crude prices. U.S. shale producers have responded to low crude prices by innovating and cutting costs. Breakeven for many is now $40 a barrel, with some said to be as low as $25. Rig counts have doubled since the Spring of last year and output has continued to rise, contributing to the increase in WTI inventories.

The oil price faces two major headwinds the FT reports. The first is little or no evidence the global oil market is really coming into balance as signatories to the agreement continue to cheat, and the second is an overhang of speculative length in the futures market. Part of this week’s price falls are said to be due to speculators bailing out of long positions after the realization that the market may not be coming back into balance as hoped late last year.

Where the oil price goes from here is anyone’s guess but with even Saudi Arabia threatening not to renew the cutback agreement in the summer if global inventories do not fall back as expected — if other members of the agreement continue to cheat — the probability is the market overhang could get worse in the second half of the year.

U.S. shale oil producers appear to be enthusiastically ramping up production which will likely add do U.S. oil inventories and further depress the price. The oil price has a level which realistically reflects supply and demand but it’s almost certainly below $50 a barrel in today’s market.

PREVIOUS POST:
Aluminum Price Forecast, March 2017: Premiums to Rise in Japan
NEXT POST:
For Diploma, Right? Engineers Give the State of US Infrastructure a D+