On the Acquisition Trail Again, Agarwal’s Volcan Purchases 13% of Anglo-American

Agarwal has bought the shares in the name of his family trust Volcan, saying it is just an investment in a “great company with excellent assets,” stating that he had no immediate plans to launch a takeover, according to the Financial Times.

No one believes him, of course, or at least not the part about it just being an investment in a great company with excellent assets. True, the prospect of Agarwal’s Vedanta with a market cap of $2.99 billion, being able to takeover Anglo-American with a market cap of  $20.84 billion (£16.7 billion) is verging on the absurd, but the truth is Agarwal is probably more interested in a seat on the board and the opportunity to influence Anglo-American’s future in South Africa than seriously taking over a group that is seven times the size of his own. 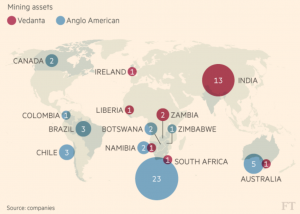 Anglo-American has made no secret of its desire to divest some of its more troublesome South African investments.

The political instability and red tape in South Africa has caused the miner problems in recent years and Anglo has already sold two assets to Vedanta including the Gamsberg zinc project in the Northern Cape which Vedanta should bring to production next year. 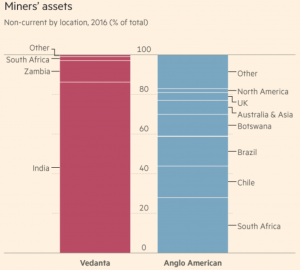 But neither is Vedanta a stranger to the complexities of doing business in Africa and probably finds the business and political climate not too different from its experiences at home in India. Agarwal is keen to expand the mining firm outside of its home market in India and sees Africa as a logical platform for growth. Volcan’s 12% stake in Anglo is second only to the 15% held by the Public Investment Corporation (PIC) of South Africa. The PIC manages about $120 billion of assets on behalf of South Africa’s Government employee pension fund and has been pushing Anglo to create a national champion by bundling coal and iron ore mines in South Africa together with some of Anglo’s Platinum assets to create a large diversified and potentially black-owned company, the FT reports.

Whether Agarwal has already done a deal with PIC is purely speculation, there is no evidence to support that, just our suspicious minds, but with both parties’ interests somewhat aligned – peeling away assets from Anglo, their combined shareholding could be used to exert considerable pressure on Anglo-American during the three-year time window Agarwal’s complex bond-backed share purchase deal has afforded him.

Anglo itself seems to have gotten through the worst of its debt reduction and restructuring program of recent years. With rising metal prices and cost savings putting the group in a healthier position, one where it does not actually need to sell assets despite agitation from some shareholders to do so, after years of an underperforming share price. It will be fascinating to see what Agarwal manages to pull off following this move. Clearly, at 63 years of age he has lost none of his drive and ambition to turn Vedanta into a rival to Rio Tinto Group or BHP Billiton.