Steel Prices: Cold-Rolled Coil Hits a 5-Year High, Will They Continue to Rise?

U.S. Cold rolled-coil prices rose to their highest levels since March of 2012 this week. Spot steel prices saw some upward action in January, however, prices really came under pressure in early February.

In March, U.S. steel mills are pushing for another round of price hikes. So far, they seem to be succeeding. 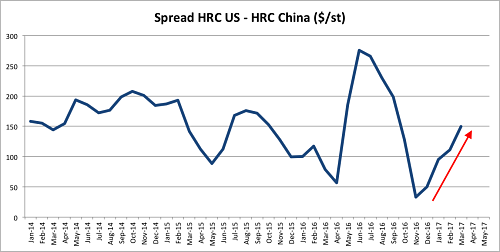 The price arbitrage started to widen again this year as momentum in U.S. steel prices picked up. However, the arbitrage is still relatively narrow compared to historical levels, especially in hot-rolled coil. Therefore, U.S. mills still have some room to hike prices. Still, for the rally to be sustained throughout the year, Chinese steel prices will need to keep rising.

In January, Chinese steel exports fell near 24% compared to the same month last year. In absolute terms, January steel exports were at their lowest level since June 2014. Exports fell by double digits in the last four months of 2016. While more countries act against the threat of a flood of Chinese steel, we could see further moderation in exports this year, which bodes well for global steel markets. What’s surprising is that exports have falling despite rising output.

So far, solid demand in China has absorbed the increase in output, or at least most of it. The Caixin Manufacturing PMI in China rose to 51.7 in February, beating market expectations and marking the eighth-straight month of growth. In addition, there are rumors that China is stocking its excess steel production. According to SteelHome, hot-rolled coil and rebar inventories in China have surged so far this year.

All About Production Cuts

In conclusion, U.S. mills could continue to raise prices in the short-term. However, for a sustained bull market in steel prices, Chinese steel prices will have to rise as well. China’s domestic demand looks strong, but it won’t be enough to support a rising price trend in the face of rising output.

Beijing “has ordered curbs on steel and aluminum output in as many as 28 northern cities during the winter heating season, as it steps up its fight against pollution,” according to Bloomberg, but we need to see if those cuts actually materialize this year. China will need to intensify its efforts to curtail excess steel capacity. Otherwise, if production continues to grow unabated, it could hamper this price recovery.