Following the fortunes of Boeing and Airbus, you could be forgiven for thinking that aircraft manufacturers always run late, over budget, and the resulting end product can struggle to meet initial expectations. 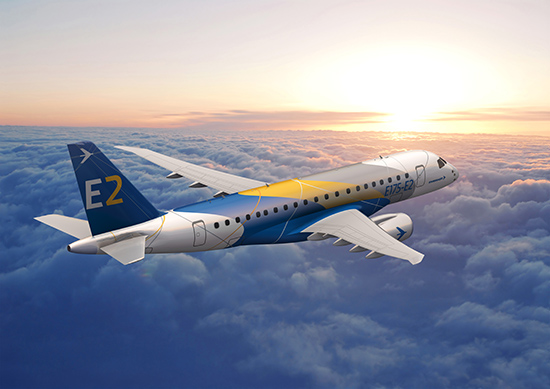 But Brazil’s Embraer, the world’s third-largest commercial jet maker, has shown with its next generation narrow body regional aircraft, the E-2 series, that it doesn’t have to be that way. Embraer introduced the aircraft at the Paris Airshow in 2013 and it was first displayed last summer at the Farnborough Airshow just 45 days after its maiden flight. The aircraft is set to be delivered on time, on budget, and even slightly underweight.

Embraer has been very successful with their current E-jet series and the new E-2 program looks set to maintain the company’s 55% market share dominance of the regional jet market. The E-2 will commence deliveries in the first half of 2018 and variants will be capable of carrying between 70 and 130 passengers. An FT article notes that Embraer has a backlog of commitments from airlines for 690 E2 aircraft, including firm orders of 275.

The company has struck a wide-ranging and exclusive arrangement with Alcoa Corp. for aluminum sheet and plate for the wings, skins and fuselages of the model, with other Alcoa products being used in key applications such as wing ribs, fuselage frames and other structural parts. The long-term collaboration is said by Aluminum Today to be worth $470 million to Alcoa. “PurePower” engines will be supplied by Pratt & Whitney.

The E-2 is forecast to be 24% more fuel efficient per passenger seat than the current E series and should help Embraer fight off competition from Bombardier of Canada and upstart new Asian aspirants in the fast-growing Asian market.

Air transport in China is said to be growing at 10% a year, although by contrast traditional markets like Europe and North America are barely managing 1% growth and Embraer has had to assure nervous investors that the sector is healthy and the company’s efficient delivery of the new E-2 project assures their continued leadership in the segment. With the exception of a massive $200m fine for bribery last year the firm is doing well and outperforming many of its national manufacturing peers. Its performance on the E-2 should be an example to its larger rivals that new aircraft development is not necessarily a recipe for disaster.

PREVIOUS POST:
Nickel Prices Break Even in Q1 Due to Complex Supply Narrative
NEXT POST:
Niocorp One Step Closer to Producing Scandium in Nebraska; No OPEC Output Cut Extension Without One for Iran