Unlike the U.S., which has retained a paper $1 bill, the U.K. did away with the venerable pound sterling banknote in 1983, replacing it with a round dual-metal, £1 coin much to the disgust of traditionalists.

Broadly speaking though, the £1 coin has been relatively successful in terms of longevity compared to the paper note. The former has lasted 40 years but the latter about nine months, but at a cost, the British one pound (£) coin has suffered from high levels of counterfeiting. 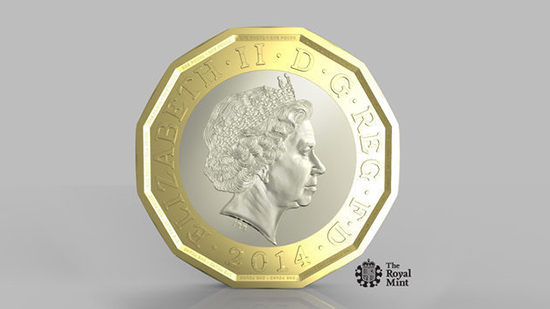 There are thought to be more than 30 million fake £1 coins in circulation, adding up to 2.55% of coins according to a recent article in The Sun newspaper. The current pound coin is made up of 70% copper, 24.5% zinc and 5.5% nickel — weighing a mere 9.5 grams. The coin also has a diameter of 22.5 mm (7/8 inch) and a thickness of 3.15 mm (1/8 inch). The new pound coin is also constructed from two different colored metals like the old one, but the new version contains an iSIS security feature (a new high-security coinage currency system developed by The Royal Mint).

According to the Huffington Post, the security feature took three years and £2 million to develop, and is embedded in the heart of the coin. It uses technology already used in banknotes that allow its authenticity to be established incredibly quickly with a simple scan.

The 12-sided £1 coin enters circulation today, and replaces the familiar round £1 coin, which has been in circulation since 1983. The British are said to have about 1.3 billion of the traditional £1 coins stored in money boxes around the country, so changeover is going to be a massive task for banks and the Royal Mint in recycling the old coins to new at a furious pace. They intend to hit the ground running though with 700 million of the new twelve-sided supposedly fake proof coins by the start of circulation this week.

Up to October 15, both coins will be in circulation causing major headaches both for industries having to switch vending machines and car parking meters from the old £1 coin to the new, but also for the public who will have to carry around a store of both coins because they have no idea which will work when they come to pay for coin-fed automated services.

Nor are vending machine operators over the moon. With around 80,000 car parking machines across the U.K., the British Parking Association (BPA) estimates that upgrading them will cost the industry around £50 million ($63 million to you Yanks) to change the machines over, and many may opt to upgrade older machines from mechanical coin machines to cashless electronic systems that require a mobile phone to pay the parking fee — great unless you have no signal or a flat phone battery!