Home | Global Trade | How Commerce Changed the World: An Appreciation of ‘Black Sails’ as it Signs Off
Commentary

How Commerce Changed the World: An Appreciation of ‘Black Sails’ as it Signs Off

Here at MetalMiner, we occasionally write about our favorite TV shows, especially when they shed light on the metals and other commodity markets that we cover in depth today.

Never could there be a better examination of how commodities and commerce changed the New World, with a hand from new technology, than the Starz drama, “Black Sails,” which ends its fourth season and its series run Sunday night. 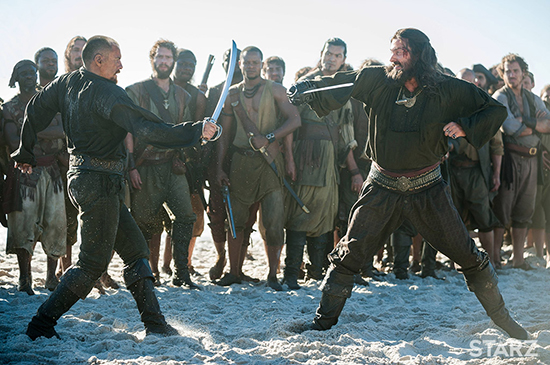 What’s a pirate show without Blackbeard? Image courtesy of Starz.

What does a dark and very adult prequel to Robert Louis Stevenson’s “Treasure Island” have to do with metals, you might ask? Just that the prices of the metals we track today are the same type of information that buccaneers based in the Caribbean in the 18th Century tracked for rum, tea and other shipments marked for plunder in the new world.

The series stars Toby Stephens as Captain Flint, a former British naval officer turned pirate who leads a crew based out of New Providence Island in the Bahamas. His co-star, Luke Arnold, plays young Quartermaster Long John Silver whose adventures begin 20 years before the events of “Treasure Island” and centuries before his name would ever grace a chain of fast food restaurants known for battered fish.

The series shows how disruptive technology enabled mass revolt by an underclass of people longing to escape a life with no real options for economic freedom. That’s not that different from what we’re seeing in metals and trading information today. The pirates of “Black Sails” operate out of the lawless Port of Nassau where they are essentially untouchable by the rules of society and the law. We followed a stockpile of aluminum from China to Mexico to Vietnam in what very much looked like an attempt to avoid import laws or at least hide wealth. 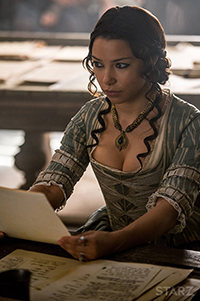 Max (Jessica Parker Kennedy) rises to a leadership position for all of Nassau, despite being born into poverty. Image: Starz

The disruptive technology that enables Captain Flint and Silver is naval training that most men of fighting age received early at the time, mostly due to the necessity of dynastic powers such as England and Spain requiring a steady stream of sailors to fight the monarchy’s wars. This training allows men like Silver and Billy Bones to essentially throw away their past, hit the high seas and go a’piratin’. Sure, the life is brutal by today’s standards and Starz spares no expense showing the violent reality of what taking a prize ship had to be like back then. We even witness Silver lose the leg that turned into his pegleg in so many children’s cartoons in a nasty below decks pirate surgery scene with only rum for anesthesia. There were no parrots singing songs in that one. Still, even a violent life is a free one compared to one of servitude, right?

Today, it’s the ability to code and master electronic trading that opens up opportunities for those smart enough to take advantage of price trends.

The series takes pains to show just how lucrative the trade routes to the New World were and how that prosperity, despite massive theft via piracy, made the merchants from colonial port cities who traded with Europe wealthy enough to essentially shrug off the occasional lost shipment. The Guthrie family is portrayed as wealthy Philadelphia merchants, but daughter Eleanor follows her father to Nassau where she can actually be in charge of the pirate port despite being a woman, something that would never happen in Philadelphia where her only future would be to get married young. Piracy disrupted the social order as a well as the old way of doing business.

Of course, any discussion of the social upheaval spurred by the seafaring trade in the New World can’t leave out the slave trade or how that particularly insidious form of human trafficking enriched producers of commodities in the colonies via cheap, slave labor.

“Black Sails” shows that the sugar plantation owners in the Bahamas relied heavily on the Royal Navy to protect their forced labor shipments from men like Flint and Silver. The program’s depiction of slave revolutions, both on ships as cargo and on land in plantations, always benefits the pirates. Africans condemned to a horrible life in an alien world help Flint and Silver to overtake outnumbered crews. Even as the program shows the deplorable conditions these men, women and children were held captive in on cross-ocean voyages that many didn’t survive. Freed slaves are also shown as a source of willing new recruits in the ship-based pirate democracies. There’s even a secret former slave colony in the islands that protects the pirates after Governor Woodes Rodgers (Luke Roberts) arrives and institutes martial law in Nassau.

The inherent, pervasive racism of the triangular trade wouldn’t really matter very much if you’re a pirate operating outside of the law, would it? Just another outdated and outmoded institution to shrug off. As we contemplate issues such as immigration, trade barriers and anti-dumping laws in the modern world, it can be enlightening to look back at the changes that took place when trade first became global.