A recent Financial Times article lays the blame for falling iron ore prices in China firmly at the door of Australia’s Department of Industry Innovation and Science, whose latest quarterly report predicted average prices in China would fall to $65 per metric ton this year before ultimately declining further to $51 per mt.

The FT quoted the department’s report saying prices would be weighed down by the combined impact of ongoing growth in low-cost supply and soft demand. 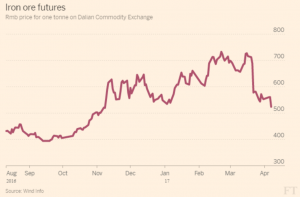 While we don’t doubt that investors will have taken notice of the department’s report, the fact is analysts have been calling for a fall in the iron ore price for months now. Indeed, the rising tide of supply has been expected to weigh on prices for much of the last six months, such that continued price resilience and robust demand have caught some by surprise.

But falling iron ore prices recently, down a massive 7% on the Dalian Commodities Exchange according to Australia’s Business Insider, are not alone. Prices for steel rebar on the Shanghai Futures Exchange are down nearly 5%, coking coal is down over 4% and coke prices are down nearly 5%. MetalMiner’s daily reports on domestic steel prices in China have also shown the daily price falls underlining that negative sentiment are widespread and not confined to iron ore alone. As Business Insider points out, the speed and size of the price fall suggests it is being driven by speculators unwinding bullish bets, in part influenced by ever rising levels of Chinese port inventories of low-grade iron ore.

Australia’s Department of Industry is not alone among official bodies calling for a likely price fall. Li Xinchuang, the vice-president of the China Iron and Steel Association, told the Global Iron and Steel Forecast Conference in Perth recently that he expected to see iron ore prices fall to as low as $55/mt later this year, citing a combination of rising supply in Australia and Brazil combined with the Chinese governments ordered closure of some of China’s steelmaking capacity would result in a significant excess of supply this year.

Rising protectionist measures around the world will further hinder producer’s ability to maintain production levels by dumping excess capacity abroad. Reuters reported recently that the European Commission had set anti-dumping duties on imports of hot-rolled flat steel products from China at a higher rate than those already in place. The commission set final duties of between 18.1 and 35.9% for five years compared with provisional rates imposed last October of 13.2 to 22.6% following a complaint launched by the European steel association Eurofer on behalf of ArcelorMittal, Tata Steel and ThyssenKrupp. Interestingly, the commission said that the measures would not be applied on the same products from Brazil, Iran, Russia, Serbia or Ukraine, although they were being kept under investigation.