Gold bears have had quite a ride since the start of this year. The price spiked to $1,286 per ounce last week, a rise of 11% since the end of last year as this chart courtesy of the Financial Times shows. 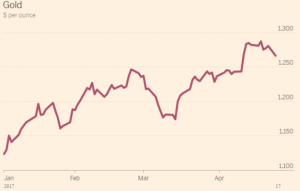 Despite a gradually improving global economic picture, geopolitical tensions have increased in recent months first with Syria and more recently with President Donald Trump’s announcement that he was prepared to take military action in North Korea.

In Europe, investors looking to protect themselves against the political risk associated with the first round of the French presidential elections where the fear of a shock victory by the far right leader Marine Le Pen was considered a distinct possibility. During this same period, the U.S. dollar has weakened somewhat in value and with gold inversely correlated to the currency, as the dollar falls gold, and other commodity prices, rise.

Well, what a difference a week makes. North Korea has shown itself to be less capable and in the face of a tougher stance from America, less belligerent than during previous bouts of posturing.

In the French elections, the least bad option, Emmanuel Macron, has emerged victorious from the first round over Marine Le Pen with nearly all observers expecting he will win through in the second round of voting on May 7. Later this week we should hear President Trump’s tax policies which are widely expected to include substantial reductions in personal and corporate tax rates. On the back of solid U.S. and global economic growth, such inflationary fiscal stimulus will only hasten further U.S. Federal Reserve rate increases. Not surprisingly, Goldman Sachs is not alone in predicting further weakness in the gold price, which weakened promptly on the news of the French elections and is targeted by Goldman to fall to $1,200 per ounce this summer. While not a universal truth, Goldman Sachs predictions do tend do have an element of being self-fulfilling simply because so many investors take their advice into consideration when making investment decisions. 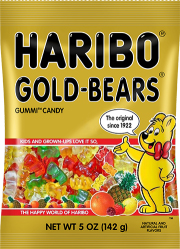 These gold bears haven’t had as big a run as their metals brethren. Source: Haribo

Of course, there remain counter arguments as to why the gold price may yet rise. Trump’s presidential decrees are easier to make than getting legislature onto the statute book. Proclamations this week over the tax reduction will likely meet a more favorable Republican response than there was the case with healthcare but, even so, may be much delayed or watered-down before having any impact on the economy.

Likewise, U.S. growth could slow reducing the impetus for the Fed to deliver on its three expected rate increases this year. The Fed has frequently undershot rate rise expectations over recent years. Finally, our friend in Pyongyang has the ability, and no doubt inclination, to still do something stupid despite pressure being brought to bear to back down by his Chinese bankers. On balance, though, gold bears have probably had as good run this year as they are likely to get and profit-taking is now inevitable for all but long-term holders of the yellow metal.

PREVIOUS POST:
ERP Strategic Minerals Has a Deal in Place to Purchase Mountain Pass Rare Earths Mine
NEXT POST:
First Autonomous Cars, Now Flying Cars? We’ve Been Promised Them Since the Jetsons!