First Autonomous Cars, Now Flying Cars? We’ve Been Promised Them Since the Jetsons!

10 years ago, the concept of self-driving cars seemed the stuff of science-fiction. Today, self-driving cars are not an uncommon sight in some cities and the U.K. government has just approved their trial operation between London and Oxford in a bid to bring the technology more rapidly to market.

Companies like Google, Uber, Apple and a host of mainstream automotive giants are all investing hundreds of millions of dollars to bring the technology to reality. Over a few brief years, we as the general public have begun to accept the statistics that self-driving cars are dramatically safer than those is piloted by human beings. 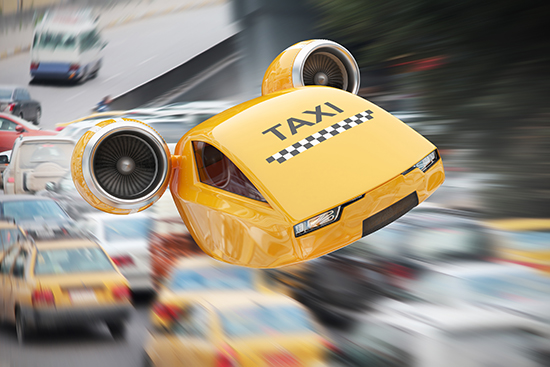 Why don’t we have flying cars yet? They’ve been promised by science fiction for decades. Source: Adobestock/Sergeysan.

As a result, acceptance by both the public and the insurance industry is now almost a given for the probable implementation by the end of this decade. But what of flying cars? A concept equally the stuff of science fiction for 70 years or more that now thanks to the dreams and deep pockets of Silicon Valley entrepreneurs may be becoming a reality sooner than we think.

Uber has announced plans to demonstrate flying vehicles by 2020 in Dubai and in the Dallas Fort Worth area, with full scale operations by 2023 the Financial Times reports. Unlike its efforts in self driving cars where Uber has spent hundreds of millions of dollars to develop the technology in-house for flying cars the ride-hailing service is forming partnerships with established aerospace firms like Brazil’s Embraer, Bell Helicopter; Mooney, a Texas-based light aircraft manufacturer and Aurora flight sciences, a Virginia-based drone maker. Like Uber’s taxi service, the firm sees flying taxis as being initially human piloted but later autonomous as the technology and FAA approval permits. Construction of four landing pads will begin in the Dallas Fort Worth area within the next year the FT reports and as part of the Dubai Road and Transportation Network Study into flying cars, Uber expects to have a demonstration service running there to coincide with the World Expo in 2020.

Ambitious as they are, Uber is not alone in pouring money into flying cars. Kitty Hawk, a Silicon Valley company back by Google founder Larry Page began testing a prototype single person flying vehicle over a lake in Northern California this year. The New York Times has an interesting video clip of the vehicle skimming just 15 feet above the lake surface powered by battery operated propellers much like a scaled up drone. The Kitty Hawk Flyer is said to be one of several prototypes the firm is designing and is more testbed than final concept. Nevertheless, Kitty Hawk, like Uber, has taken on a number of industry veterans and specialists to fast track development and the array of talent and money being thrown at these projects underlines how serious both firms are in achieving their vision of urban air mobility.

As with driverless cars, there is no shortage of competition. Even Airbus, the aerospace giant, has announced two different vertical take-off and landing concept vehicles and is said to be planning an initial test flight before the end of the year. While Chinese drone manufacturers are taking advantage of the Dubai government’s initiative to showcase autonomous flying taxis in the region later this year.

Does all this mean flying cars will be following close on the bumpers of self-driving cars? Probably not. Air-traffic control remains a major challenge, probably more so for human piloted vehicles than autonomous, but the consequences of a collision for either make regulatory approval some way off. Batteries are also an issue for electric propeller-driven vehicles. Today’s battery technology cannot support flights over a reasonable distance such as a 30 to 50-mile commute. The NYT quotes John Leonard a Mechanical engineer at MIT’s Computer Science and AI Lab “Silicon Valley is full of very smart people, but they don’t always get the laws of physics,” he said. “Gravity is a formidable adversary.”

PREVIOUS POST:
Gold Prices’ Best Days are in the Past… At Least for the Time Being
NEXT POST:
Nickel Price Forecast, April 2017: 10-Month Low Reached this Week