Our Copper MMI fell by two points in April, dragged down by a sell-off in industrial metals. In addition, supply concerns have eased as strikes at some mines ended. 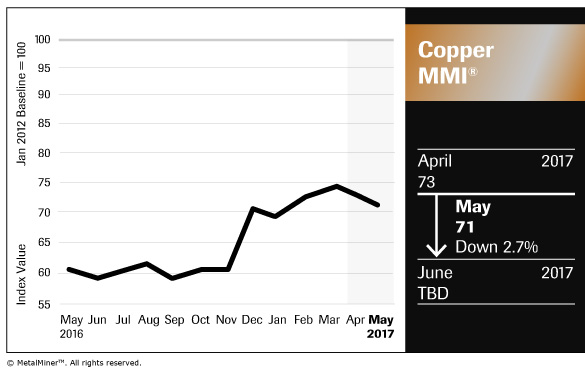 The strike at Escondida in Chile, the world’s largest copper mine, ended in late March. Soon after, a 18-day strike at the Cerro Verde mine in Peru also came to an end. A new strike at the mining company Southern Copper Corp. in Peru took place in April, but it lasted only two weeks, leaving no significant effect on production.

Meanwhile, Freeport McMoRan finally obtained a permit to export material from its Grasberg mine, the second largest copper mine in the world. The new permit will allow the company to export 1.1 million tons of copper concentrate through February of next year.

However, Freeport now has a new problem on its hands. Workers have threatened a one-month strike starting in May. The company had laid off about 10% of its workers, saying that there may be more layoffs in the future to stem losses. Moreover, the company is still confronting Indonesia over rights to the mine. With this problematic combination of protests from workers and tensions with the Indonesian government, it’s no wonder that investors are concerned about further supply disruptions this year.

Although supply disruptions eased in March and April, there is overall plenty of potential for further disruptions this year. Prices took a dip in April, but that seems to be a normal price action given that most industrial metals fell in the same month.

After a spectacular rally in Q4 of last year, prices are now consolidating in the price range of $5,500-$6,100/mt. Bulls seems still in control but they probably need another bullish development to chase prices above this price range. That development could come in the for of additional supply disruptions this year. We will be watching closely the developments at the Grasberg mine in the coming week in addition to the several mines that have contract negotiations due to this year.

PREVIOUS POST:
Where is Manufacturing Procurement Technology Headed? An Interview with Ivalua’s Paul Noel (Part 1)
NEXT POST:
Tin Prices Gradually Firming This Year After a Poor Start, But Keep an Eye on Myanmar