Our Global Precious Metals MMI inched up a point in April. However, this year the index seems to be struggling near 84 points. Let’s take a look at gold and palladium, two of the precious metals integrated in this index, to better understand the ongoing trend in precious metals. 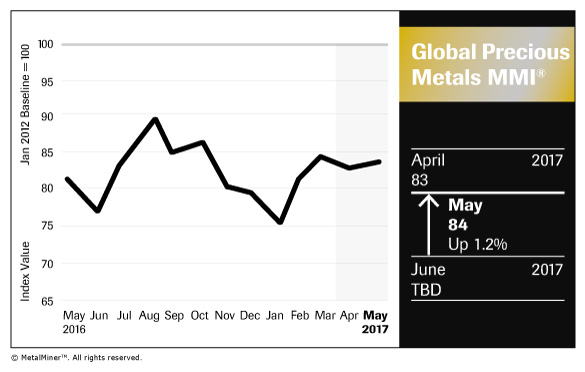 Some analysts are saying that gold is up this year on its safe haven appeal due to rising geopolitical instability. But that’s simply not true. Otherwise, we would see it reflected in stock market indexes, which are trading at record highs. Not only the U.S. but also Europe, China and other emerging markets are seeing their stock markets hit multi-year highs. Investors are confident about the prospects for the global economy, and until something proves them wrong, gold is lacking any appeal as a safe haven.

If you held gold this year, don’t thank rising political tensions; simply thank a weaker dollar and some dip buying. This year’s rally in gold follows a 18% price slump in Q4 of last year. But prices are back to their average and just 8% below $1,380/oz, a level that has been a ceiling to gold prices for four consecutive years. This means that investors will have to find good reasons to chase prices higher. Given the ongoing strength across global stock markets and the rather neutral picture of the dollar, we wouldn’t expect gold investors to get a good return on their money for the balance of the year.

As I’ve written earlier on MetalMiner, “palladium prices rose to a two-year high in April, making it the biggest gainer among precious metals. Last month we outlined some of the factors contributing to the palladium price rise: a growing auto sector; a strong South African currency; a falling dollar; and bullish sentiment across industrial metals. However, as prices continue to climb, it’s time to question how high prices can go. Despite a still solid outlook, there are some reasons to believe palladium prices could be nearing their peak.”
One of them is a potential slowdown in demand for cars. U.S. car sales declined in April, following a disappointing month of March. Markets suspect that the car industry boom that has run since 2010 has now come to an end.
Meanwhile in China, car sales are still going strong, but the pace is not the same as last year. As I wrote before, “weaker sales tax incentives have put pressure on demand this year and are expected to slow down demand even more next year. Buyers of cars with engines up to 1.6 liters paid a 5% purchase tax last year, but they are now paying a 7.5% rate. Buyers are still finding incentives to rush on buying cars this year since the rate will increase to 10% in 2018.”

Finally, as with the case of gold, palladium might need the stronger fundamentals to lure investors to chase prices higher. Historically, palladium has peaked in the range of $850-$900. Prices closed in April at $827.
FREE REPORT: How Circumvention Impacts Both Downstream, Value-Added Manufacturing

Precious metals gained this year, but gains won’t come easily from now onwards. The opportunity to buy or invest in precious metals might have passed by.