Proposals based on environmental grounds to limit polluting industries in the greater Beijing area during next winter’s primary heating period (November to March) gave a boost to the aluminum market from the moment they were first mooted last year.
Beijing’s robust implementation of environmental audits and regulation of aluminum plants this year have added to a sense that the authorities are getting serious about pollution and the environmental impact of energy intensive industries like aluminum smelting. But, as Reuter’s columnist Andy Home opined, it is protectionism in the rest of the world that is going to add backbone to these trends and act as the driving force behind further action on Beijing’s part.
Benchmark Your Current Metal Price by Grade, Shape and Alloy: See How it Stacks Up
In an article this week, Home explained how the latest investigation into aluminum imports, along the same lines as an earlier steel case, has been launched under Section 232(b) of the Trade Expansion Act of 1962, which lets a president act against imports on national security grounds. The reasoning is the U.S. has but one smelter left in operation, Century’s Kentucky smelter, capable of producing the high grades required for defence and aerospace companies making combat aircraft and the like.
China supplies almost no primary aluminum to the U.S. market. Following U.S. smelter closures, surging imports are being increasingly met by Russia and the United Arab Emirates, while the bulk continues to be supplied by Canada, as the graph below from Reuters shows.

Where China has an impact is in semi-finished products, such as sheet, plate, foil, bars, tubes and sections. Here the growth of Chinese exports to the world — and U.S. imports — has been much more significant. According to Home, on that measure China has been by some margin the largest-volume supplier to the U.S. market in recent years. 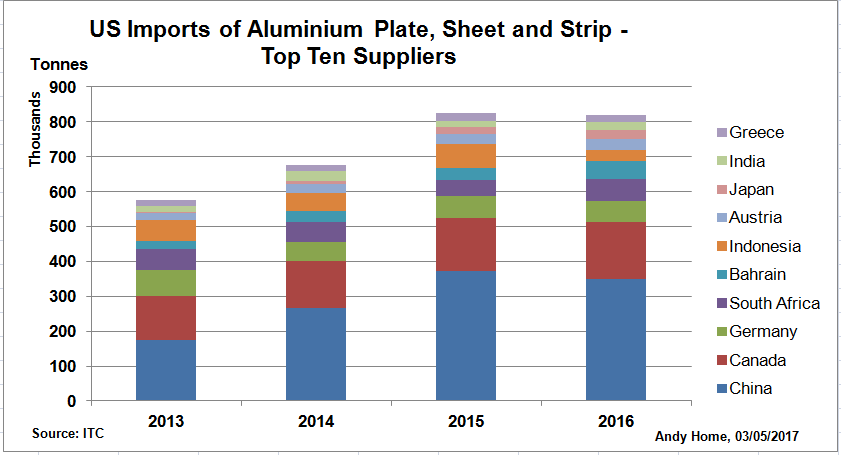 Trade negotiators point out, not unreasonably, that while there is a logic to low-energy cost markets like the Middle East, Canada and even Russia with its hydro power in the East being low-cost producers, it does not make sense for China, a high power cost market, to be so successful in supplying global markets — unless it is receiving unfair state support in one form or another.
Recognizing that a coordinated international response would be much more effective than a go-it-alone action by the U.S., representatives of the U.S. aluminum industry are speaking to EU governments and their counterparts in the EU to encourage a coordinated response. According to an article in Reuters, European smelter capacity has faced a similar collapse to the U.S., with the number of primary smelters falling by 40% between 2002 and 2015.
However, the position of the trade body European Aluminium sheds some light on the thinking. As with the U.S., China is not a supplier of primary aluminum to the EU, but downstream semi-finished product manufacturers have been severely affected by the level of imports from around the world. And here, as in the U.S., China plays a significant role. As downstream production has been forced out, smelters have lost their domestic or regional markets — so the whole value chain has been undermined.
Free Sample Report: Our Annual Metal Buying Outlook
Despite Beijing’s protestations and appeals that the World Trade Organization is the place to argue these cases out (slowly and laboriously), it does seem to be getting the message, as shown by its actions against both steel and aluminum capacity in 2017. This year may well be the start of the beginning of the end in unfettered investment and expansion in the Chinese aluminum industry. Like with steel, China is being forced — not without much argument — to take action and close excess aluminum capacity.