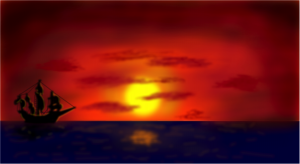 Now that Black Sails has signed off and Long John Silver is on to new adventures, it’s time to turn our attention to a different type of silver — one type of material that Silver himself spent many of his buccaneer days trying to amass.

But whereas Silver and his crew may have preoccupied themselves with coins, bars and doubloons (the former two are still big in 2017; doubloons? not so sure), we here at MetalMiner like to see how the precious metal factors into industrial end-use sectors and applications.

Turns out that one of those applications — solar panel installations, specifically — made quite a splash in the Silver Institute’s World Silver Survey 2017, produced by the GFMS team at Thomson Reuters and released just this morning.

But first, a quick high-level overview.

In addition, although primary silver production increased 1% last year, silver scrap supply, despite higher silver prices, fell to 139.7 million ounces in 2016. This is a level that has not been seen in 20 years, according to the Silver Institute’s press release for the report.

“If we look forward, we don’t think [this overall mine production drop] will be a one-off, either,” said Johann Wiebe, lead analyst of metals demand at the GFMS Team/Thomson Reuters in London, in an interview. “It’ll be a prolonged drop in supply until 2019-ish. Not large, but maybe a 2% drop annually. That’s quite a shift.”

It’s not surprising, Wiebe added, if one has seen the capital expenditures retreating over the past few years, with miners looking to protect their margins. Other non-precious metal production of base metals such as lead, zinc and copper, among others, affects the silver market — the link between precious metal and base metal commodities, in other words, is tighter than at first glance when it comes to production trends.

Ultimately, overall global silver supply and physical demand in 2016 dropped, as seen in the chart below. 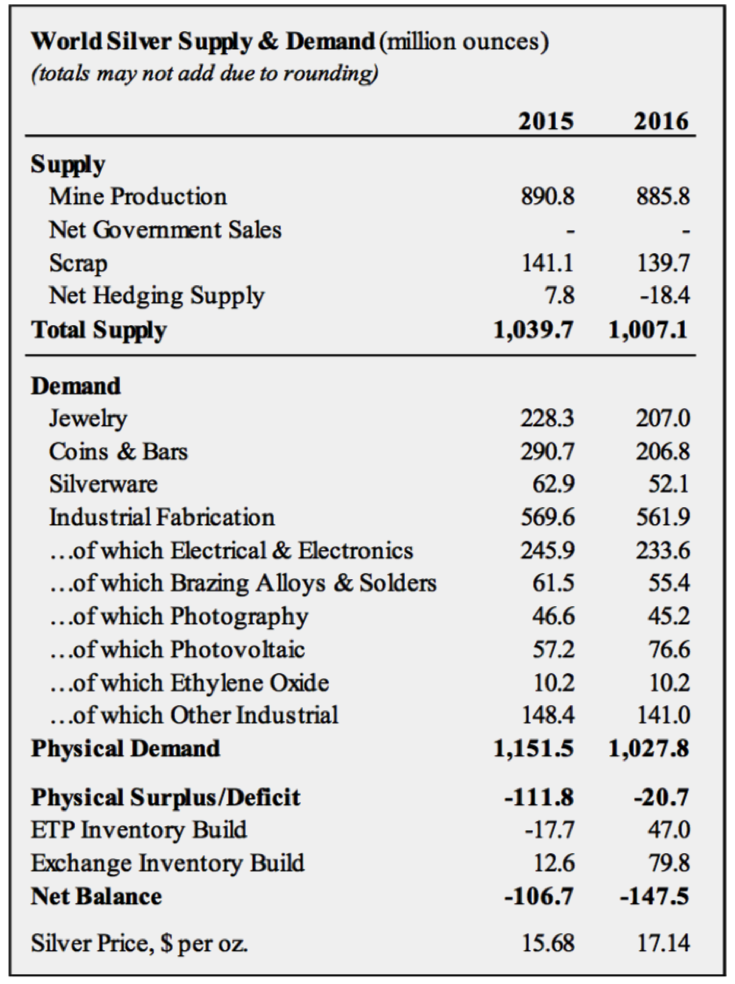 Courtesy of the Silver Institute

Interestingly, however, demand for every single type of industrial fabrication dropped or remained flat — except for solar.

According to the report, silver demand for photovoltaic applications shot up 34% to reach 76.6 million ounces. This growth was the strongest since 2010, and it was driven by a 49% increase in global solar panel installations.

“The shining star was definitely the solar sector last year, mainly because of panel installations,” said Wiebe, “but the [silver] powder stage was up considerably last year due to the panels [installed] in the U.S. and China.”

Production of silver powder used in PVs accounts for 23% of industrial silver fabrication in the U.S, according to the report. “Most of the silver powder and other electrical applications in the United States is shipped to Taiwan, South Korea and China, where it is converted into paste and manufactured into electrical components.”

“It’s not that straightforward,” Wiebe said, because “metal content per panel will decrease. The front side is still loaded with silver, but the back side is seeing reduced levels.”

“Also,” he continued, “producers are looking to substitute materials with aluminum, for example.”

It’s not as though this is going to happen next year, Wiebe mentioned, for which GFMS still expects growth to be relatively strong, but down the line as the technology continues to improve and develop, some aspects of this market may change.

What Silver Buyers Should Look Out For

Automotive will be an interesting sector to watch.

“More electrification of powertrains and circuit board switches require silver to function,” Wiebe said. “That could demand quite a bit of silver.”

The playing field has changed completely for automotive, and Wiebe mentioned that compared to conventional gas-powered vehicles, the average electric vehicle only requires 20-30,000 parts, reducing complexity significantly while changing the input-materials game. “That sounds very futuristic but it’s not that far away,” he added.

Could silver ever be as big as PGMs for the automotive sector? “I doubt it,” Wiebe said. “I think the drive towards reducing costs will be there, and applications will be tweaked to substitute materials.” Ultimately, however, due to prices and other considerations, “precious metals in general will bear the brunt” of the substitution trends, he said.

PREVIOUS POST:
Our Commodity Outlook Shifts as Bears Take Over
NEXT POST:
Electric Vehicles Have Made Big Promises But So Far Have Failed to Deliver