There are certain models that economists use to explain markets or to illustrate market behaviour. Cyclical commodity markets are one such model, and the principle of swing producers is another.
Benchmark Your Current Metal Price by Grade, Shape and Alloy: See How it Stacks Up
Among metals, nickel has been a wonderful example of both in recent years, and a Financial Times article written by a team from consultancy Woods Mackenzie ably illustrates how the metal’s current poor price performance is a result of both. 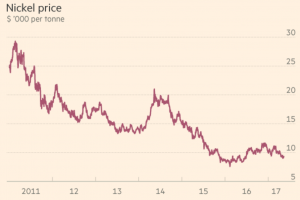 Cyclical commodity markets are invariably caused by violent swings in supply and demand. In times of rising prices, miners invest in new mines. As they take time to come to fruition, they often unhelpfully come in at the end of a commodity bull run, flooding the market with oversupply just as demand falls. Prices then collapse.
In the case of nickel, as the article reported, five years of surpluses meant nickel prices have more than halved between 2011 and 2015. Having just invested in new capacity, the miners tend to be slow to adjust. But in the end, mine closures ensue, and in the case of nickel, this resulted in the loss of about 6% of global mine supply. Supply, however, has remained more than adequate with many countries competing for market share.


As this graph shows, production from Russia, Canada, Australia and New Caledonia has been relatively consistent year on year. But supply from Indonesia and the Philippines has shown much greater volatility, sometimes doubling or halving from one year to the next.
The concept of a swing producer can refer to the supplier who is willing to raise or lower production to maintain a stable market, much like the role Saudi Arabia played in the oil markets until relatively recently. But it can also mean the supplier(s) whose arbitrary decisions can have a disruptive impact on the market, again like Saudi Arabia in their efforts to crush the U.S. shale industry by causing a collapse in prices.
Or in this case, it’s Indonesia and the Philippines. They jointly account for some 30% of global nickel supply but, more crucially, supply most of China’s massive nickel pig iron industry. As the above price graph illustrates, the price surged 30% in January 2014 after Indonesia banned the export of ore to encourage local refining. But as supply from the Indonesia fell, buyers simply switched to the Philippines, where exports rose and the price rise faltered, promptly resuming its downward trend.
Then in 2016, Regina Lopez, the then-new head of the Filipino Department of Environment and Natural Resources (DENR), ordered the closure of six mines within 10 days of coming into office, ostensibly to act against miners believed to be causing environmental damage. The price lifted a little, but oversupply was clearly dominant and the uptick didn’t last long.
Now with Ms Lopez sacked, those closures are in doubt and Indonesian production has started to pick up again. Not surprisingly, Wood Mackenzie expects prices will remain low this year and next, averaging $9,890 per metric ton. At that level, the article says, about 25-30% of global nickel production is operating at a loss, which will likely cause further closures eventually.
Free Download: The May 2017 MMI Report
But as we have seen with much of the mining sector, aggressive cost cutting has enabled mines that operated below the cost curve two to three years ago to achieve a positive return even as prices remain weak. Even so, nickel consumers and stainless producers have little cause for concern in the current market. But as always, where one or two swing producers can have a dramatic impact on prices, political machinations in the Philippines and Indonesia will likely be more influential even than the usual drivers of China GDP growth or the strength of the dollar to future price direction.