Home | Automotive | Only Electric Cars Will Be Around By 2025? Not So Fast.
Commentary

Only Electric Cars Will Be Around By 2025? Not So Fast.

The headline of this article from The Telegraph provocatively reads “The end of petrol and diesel cars? All vehicles will be electric by 2025, says expert.”

However passionately the argument is made, the 2025 deadline that comes from a report entitled “Rethinking Transportation 2020–2030” by Stanford University economist Tony Seba is almost certainly wildly optimistic. Nevertheless, it makes a good headline, and The Telegraph loves nothing better than good attention grabber.

Seba is well known for his challenging and — some would say — self-publicising proclamations. But the basic logic of his argument that a combination of trends and converging technologies will have a transformational effect on the energy and transportation markets sometime in the next decade is probably out only in terms of timing.

Long a vocal advocate for renewable technologies, the professor has repeatedly pointed to the falling cost of solar power supported by wind, hydro and, in some cases, geothermal and biomass as sounding the death knell for conventional carbon fuels such as coal, oil and natural gas. In that respect, his case is hard to argue against.

As an outlier, the British government remains stubbornly committed to subsidising a nuclear power station at Hinckley Point at a cost of around £92.50/MWh ($120/MWh) — when even in the overcast U.K., solar was being won at £71.00/MWh in 2015 and prices have fallen further since.

Wind power can be even cheaper, at least in windy Britain. Although it is widely acknowledged that the power delivery from both wind and solar is intermittent, renewables can be made increasingly viable through a combination of improving storage technology and greater integration of power grids and smart technologies allowing transmission companies to partially even out the generation and consumption over a wider area.

Seba believes that solar power costs will drop to the point where every house will have panels on its roof, and the only consumers needing access to the grid will be major heavy duty industrial firms like aluminium smelters or EAF steel producers. Realistically though, that is not a viable target for 2025. Even 2035 appears to be a stretch, but it could potentially happen one day.

Interestingly, the driving force for this is not coming from carbon dioxide emission targets but rather from the basic economics of generating costs. The first has demanded massive subsidies funded by the poor consumer, while the latter holds out the hope of payback down the line as costs fall, and regulators ensure some will be passed on to those same consumers.

Even faster than improvements in solar and wind power generation costs is the rapid advances being made in electric vehicle technology and driverless cars. Seba sees this as the end of Detroit, Wolfsburg and Toyota City — and the rise of Silicon Valley. But reports of automakers’ demise may be greatly exaggerated, to paraphrase Mark Twain’s popular misquotation.

Established automakers do have massive legacy investments in the internal combustion engine, but so far only Tesla is coming close to giving them a run for their money in electric vehicles. It may be the additional trend of driverless cars that brings the rudest shocks. Here Google and Apple are ahead, and with younger generations increasingly living a rental lifestyle — whether it is housing, cars or appliances — a move to “Transport as a Service” (TaaS) is a revolution that could catch us all by surprise early in the next decade as driverless cars begin to roll out in cities.

A Capgemini survey of 8,000 people from eight countries found that 34% of respondents found ride-sharing and on-demand taxi apps to be a feasible alternative to ownership, up from 29% a year earlier. Opinions are evolving, more so in developing markets like India and Brazil than in established ones like the U.K. 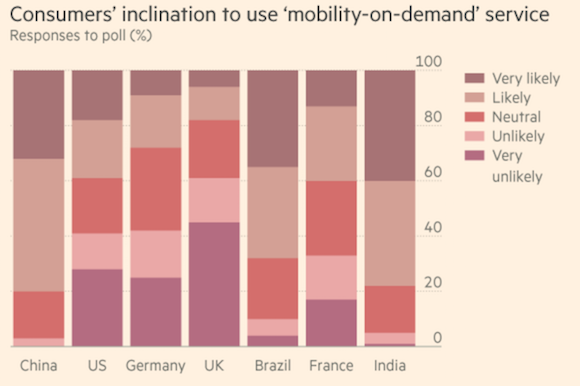 The annual consumer survey, which polled 1,000 consumers in the U.K., U.S., France, Germany, Italy, India, China and Brazil, also showed the percentage of people who would consider using an on-demand service had risen from 34% to 50% in the past two years, The Telegraph reports. Opinions are changing fast as technology is seen to become increasingly accessible and viable to existing services.

If a combination of lower EV cost and driverless cars drive down the cost per mile, Seba’s view of a non-car-owning future could happen faster than we think — again, however, it will be economics that drives the pace.

No one has a crystal ball. In terms of timing and extent, Seba’s predictions are almost certainly not going to be fulfilled, but he is right about the direction. Who would invest in a new brick-and-mortar car repair shop? The Tesla S has 18 moving parts, 100 times fewer than a combustion engine car. Maintenance is essentially zero. That is why Tesla is offering infinite-mile warranties. What role will the conventional combustion engine service centre play a decade from now?