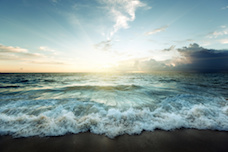 Extending that metaphor is easier now than it’s ever been for us writing on this topic: the reshoring of American manufacturing from abroad — and specifically, the net gains in jobs that we’ve been seeing in 2016 and early 2017 as compared with the trends in the early 2000s.

(I envision the emigrating jobs huddled together for warmth on a seaworthy vessel, with Shanghai getting smaller in the distance as the Pacific waves toss the boat ever closer toward Long Beach… if only it were that poetic.)

Back to reality. The Reshoring Initiative has just released its 2016 Data Report, and the numbers seem to tell a rosy story. According to the report press release, “in comparison to 2000-2003, when the United States lost, net, about 220,000 manufacturing jobs per year to offshoring, 2016 achieved a net gain of 27,000.”

“The numbers demonstrate that reshoring and FDI are important contributing factors to the country’s rebounding manufacturing sector,” the release concluded.

But of course, it’s not that easy. Major policy changes will have to be made or improved to continue the reshoring trend (which is still in its early stages), according to Harry Moser, founder of the Reshoring Initiative.

In a way, the U.S. should aspire to host conditions like those in Germany, Moser told me, including a supportive government, VAT, low healthcare costs, and an appreciation of the benefit of local sourcing.

RELATED: We chatted with Moser in a video interview a few years ago when the latest results within the trend were gaining steam (below).

According to the full report, in 2016, fabricated metals had a good showing with the fourth-most reshored jobs by industry category. Also, primary metals moved ahead of non-metallic minerals: 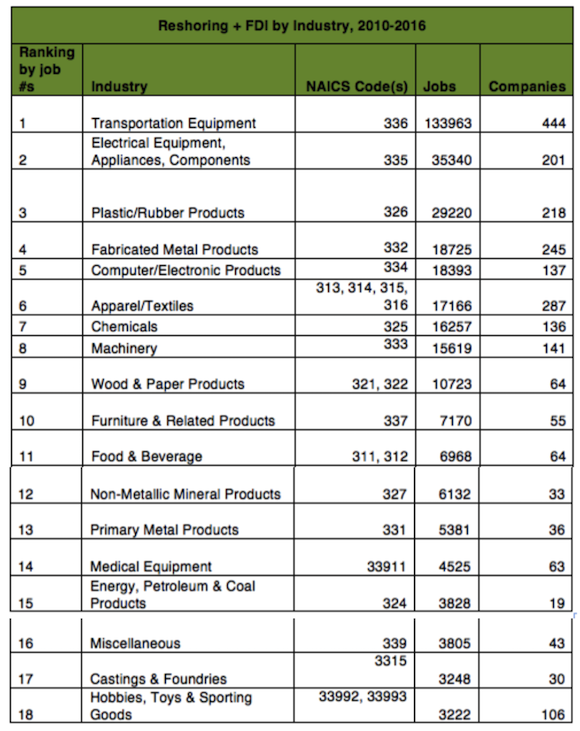 Good to see that toys and hobbies industry jobs are coming back… but not nearly as quickly.

One aspect of our new economy that’s equally seen as a villain and a hero is automation — especially industrial robots.

The top five U.S. companies in terms of reshored jobs are Wal-Mart, Ford, Boeing, General Electric and GM, accounting for about 16,000 reshored jobs over the past five years, according to Reshoring Initiative data used by Cutting Tool Engineering (CTE) magazine in this infographic. (Moser has compiled a neat master list of companies taking part in reshoring efforts are compiled here.)

But according to the same infographic, in 2015, about 50% of the manufacturing jobs lost between 2001 and 2013 were due to automation. Indeed, “industrial robot sales increased by 15% to 253,748 units, the highest level ever recorded,” according to data gathered by CTE — and you bet a good 80% of those top five reshoring companies are buying and using industrial robots.

However, skilled workers are needed to at least man (and wo-man) those automated robots, even if what those robots produce is coming back stateside. According to Moser, further cultivating a skilled workforce — such as that in Germany or Switzerland — will be essential to keeping the reshoring movement going.

January 2017 had the all-time “highest monthly rate of job announcements,” according to the 2016 Data Report, and the Reshoring Initiative’s forecast for the rest of 2017 is that reshoring and foreign direct investment trends will be flat to slightly up over 2016 numbers.

PREVIOUS POST:
Where Next for Oil Prices?
NEXT POST:
This Morning in Metals: Freeport Indonesia Strike Extended, Oil and Silver Prices Rise