Home | Commodities | Where Next for Oil Prices?
Commentary

Where Next for Oil Prices?

It isn’t an idle question. Oil prices are a proxy for energy prices, and a rising oil price can be supportive for energy intensive metals like aluminum.

A rising oil price is also taken as a proxy for rising industrial demand – a bullish indicator that global growth is strong. A falling price, on the other hand, should be good for consumer spending as it keeps more money in drivers’ pockets and lowers the cost of goods sold for companies far and wide – but particularly for those in the transportation or more energy intensive sectors.

But despite rising last year following the agreement on the parts of OPEC and major non-OPEC oil producers to limit output, the price has since fallen back so consumers are not surprisingly wondering where it goes from here.

Just this month the two architects and key players in last year’s agreement, Saudi Arabia and Russia, announced they would continue with the agreement, set to shortly expire, until March 2018 and indeed will accelerate cuts to reduce near record inventories. It should be said the announcement still must be officially agreed at next week’s meeting of OPEC ministers in Vienna.

While initially slow to contribute, Russia has stepped up cut backs of late and combined non OPEC cuts are said to be some 255,000 b/d in April, but others such as Brazil and Canada are expected to increase output in Q2 and the USA has added substantially since last year. According to Oilprice.com, U.S. oil production has risen to approximately 9.3 million barrels a day and is projected by the EIA to reach 10 million barrels a day by 2018.

In the meantime, crude oil inventories remain stubbornly high. Most recent EIA data puts crude oil inventories at 527.8 million barrels, towards the upper end of a five-year high. Rising production from non OPEC and some OPEC countries like Libya and Nigeria not included in the agreement is overwhelming cut backs made by Saudi Arabia, Russia and Middle East producers, all set against a back drop of lacklustre demand growth as vehicle economy improves mitigating the “benefit” of rising car sales to demand. Even talking up the market only provides a temporary boost. 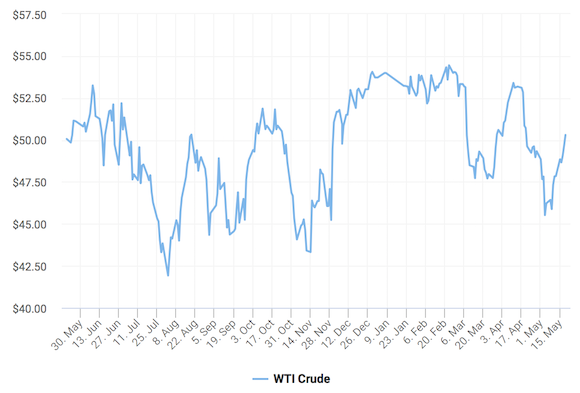 As the above graph illustrates, crude oil prices have been doing their usual dance to the media’s tune. Initially on a decline, WTI futures fell on May 4 to $45.52 per barrel from an April peak of $53.40. The fall has been steady since the deal between OPEC and non-OPEC oil producers was signed last November, Oilprice.com reports. Since then, WTI has rallied up above $49 as news came out of an OPEC’ extension to the cuts.

But how realistic is this rally in the face of high inventories and rising output from several sources despite the OPEC led core trying to cut? The answer comes down to economics, Oilprice.com suggests. The Saudi-Russian core has an average cost of production of $14/barrel; the U.S. shale disrupters have a breakeven estimated by some of $23/barrel. Specifically, in the Bakken the average breakeven cost per barrel was $59.03 in 2014, falling to $29.44 in 2016. That’s a reduction of 50% in just two years, and with much of the industry hedged forward at around $50/barrel, production has only one way to go and that’s up.

With oil producer’s national budgets all significantly underfunded, the incentive is to continue production to the maximum that their respective agreements, allocations or capacity will bear. It’s hard under such circumstances to see an upside for the oil price this year or next.

PREVIOUS POST:
Industrial Metals Sell-Off With Potential For More Downside
NEXT POST:
U.S. Reshored Jobs Rising — But What Will 2017 Bring?