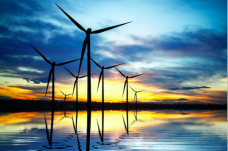 One could say it’s slightly ironic that an industry championed in the U.K. as an area of expertise to be taken to the world is in practice dominated here by a Danish company, Dong Energy.

The industry is offshore wind turbines — and I make the distinction between onshore and offshore because many countries have been early adopters of wind turbines. The U.S. invested $14.5 billion in wind power project installations in 2015, and China leads the world in onshore wind generating capacity. Offshore, however is only just taking off — no pun intended.

Cost reductions are being driven in part by the development of ever larger turbines, more practical off shore than on shore, where aesthetic objections are more frequent with giant wind turbines accused of spoiling the landscape. Wind also blows more consistently off shore, increasing the utilisation rate of offshore turbines closer to that of conventional power sources.

Dong Energy’s new turbines just commissioned at Burbo Bank in the U.K. are 400 feet high and weigh in at 100 tons each. The Telegraph reports that each rotation of the blades generates enough electricity to power a house for 24 hours. Burbo’s 32 turbines cover the equivalent of 6,000 soccer pitches, and each turbine is rated at 8 MW but are still far from the final word.

Dong Energy’s boss Benj Sykes is quoted by the paper as saying that he expects to be installing turbines with double this capacity by 2024. The first phase at Burbo in 2007 was with 3.7 MW turbines. This phase sees 8 MW turbines, but by the mid 2020s, 15 MW monsters could be installed, achieved in part by larger sizes and in part by improvements in design and efficiency.

In the U.S., billions of dollars are flooding into offshore projects. Britain’s Scottish Power has taken 50% of the Vineyard Wind project 14 miles south of Martha’s Vineyard off the Massachusetts coast, which will be as large as all Scottish Power’s current projects in the U.K. combined.

Another project off the coast of North Carolina could be generating two to three GW within five years, the equivalent of the latest and largest nuclear power stations, but at a far lower cost.

Investment opportunities in the U.S. dwarf what is possible in the U.K. despite the latter’s early lead in technology and expertise. The global renewables energy market is estimated at $290 billion, and over the next decade, the U.S. will make up a sizable portion of that, backed by technical innovation and a dynamic investment market. As industries like coal mining wane, new ones like wind power will bring higher earning and more technical jobs to replace them.

PREVIOUS POST:
General Motors Has Finally Called Time on the Indian Market
NEXT POST:
Is China’s New Megacity a Big Deal for Steel Demand? Not Really