Home | Commodities | U.S. Dollar Outlook and What It Means for Metal Prices
Commentary

U.S. Dollar Outlook and What It Means for Metal Prices 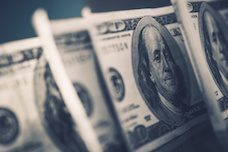 The U.S. dollar got a boost after the presidential election as markets were encouraged by prospects of lower taxes, fiscal stimulus and deregulation that would accelerate growth of the American economy.

But this month, the dollar has fallen sharply, hitting a seven-month low. A weaker dollar gave some relief to depressing commodity markets.

Why then is the dollar losing its luster now?

First, the dollar had steadily risen for three consecutive months. It’s not uncommon to see profit-taking after such an increase. But there are also some fundamental reasons behind this sell-off.

Selling intensified after the recent political turmoil around President Donald Trump as investors worry over political stability in the U.S. Investors also worry that under these political turbulences, the Trump administration will struggle to implement the pro-growth initiatives that markets had taken for granted. Finally, the euro appreciated against the dollar as political risks in Europe eased following the French elections.

Can This Decline Be Reversed?

US Dollar Index could bounce back up soon. Source: MetalMiner analysis of stockcharts.com data

Yes. The decline is starting to look oversold. That means that investors will need little reason to buy the dip. What are the fundamentals drivers that could trigger that recovery?

It will be important to monitor the actions of central banks in Europe and the U.S. If the European Central Bank doesn’t move away from easing policies on June 8, we could see downward pressure for the euro.

In addition, things are lining up for another interest hike in the U.S. Federal Reserve meeting minutes on Wednesday signaled hat officials are very likely to increase interest rates in their meeting on June 15.

Finally, news for Trump, if positive, would help increase investors’ confidence on the dollar. The former FBI director James Comey is expected to testify publicly before a Senate panel on connections between Russia and the Trump campaign.

The dollar is a big driver of metal prices. Industrial metals recently recovered some ground as the dollar sold off. However, it’s still early to become long-term bearish on the dollar. The developments explained above could lure investors to buy dollars again, adding pressure to a shaky market in industrial metals.

PREVIOUS POST:
What is Trade Circumvention? Hint: It’s Certainly Nothing New
NEXT POST:
While the U.S. Tries to Bring Back Coal Jobs, India Embraces Clean Energy