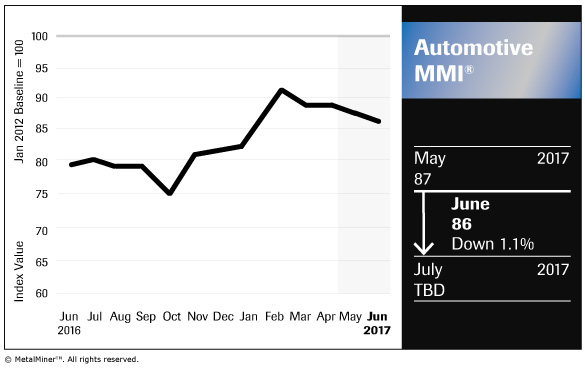 The Automotive MMI, our sub-index of industrial metals and materials used by the automotive sector, dropped by one point for a June reading of 86. The Automotive MMI has not seen an increase since early this year, when the figure accelerated from a January reading of 82 to 92 in February.

Overall, consumers seemed to pass on auto purchases in May, continuing the slowdown from January-April. Car and light truck sales — checking in at a total of 1.52 million in May — were down for the third month in a row. Automakers reported a 1% drop in sales from the previous year, according to a Reuters report.

While Ford Motor Company’s sales are down by 3.5% in the calendar year to date compared with the same point in 2016, it had a good May, edging out GM and others, according to data from Autodata Corp.

As for Chinese auto sales, those are down, too, despite a strong first quarter. Reuters reported a 2.2% drop in April sales after a 5% rise in March. The decline was the largest in China since August 2015, according to the report.

So how does that related to the metals side of the story?

In the metal markets, prices of U.S. hot-dipped galvanized (HDG) steel dropped to a 2017 low, falling by approximately 7 percent to $778/short ton. The price marked the lowest for steel since Dec. 1, when it checked in at $740. After a strong first quarter for HDG steel, prices are on the downswing. Any effects of President Donald Trump’s administration’s national security probe into steel imports — and their potential effects on Chinese steel markets — remain to be seen.

Moving abroad to the London Metal Exchange, copper posted a slight decline to $5,639/metric ton, a drop of 1%.

In China, lead saw a small decline of $3 last month, putting the non-ferrous metal at $2,348.14/metric ton. The drop continues a downward trend for Chinese lead — since February, prices have declined by just over 13%.