MetalMiner’s Copper MMI held steady in June, driven by the recovery of the LME Copper 3-month price, which held above previous lows. 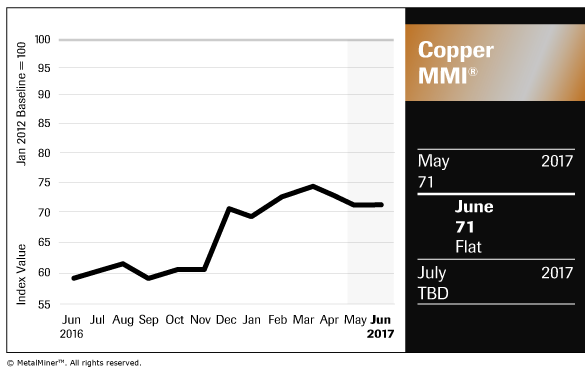 The demand and supply balance has affected copper’s price over the past few months. The International Copper Study Group (ICSG) released the 2017-2018 Copper forecast, indicating a larger than expected supply deficit for 2017 and 2018.


Supply concerns have eased during this last month, as Chile’s Escondida mine ramps up production after the strike. May production levels have now reached pre-strike production levels. Workers at Freeport McMoRan’s Grasberg mine, however, are expected to remain on strike until July.
Meanwhile, demand concerns have driven this month’s price downtrend due to the direct impact of declining Chinese demand. Manufacturing activity in China has slowed down, as has market sentiment, forcing the Chinese government to pursue additional stimulus measures.
Despite China’s slowing demand for copper this past year, Latin America appears as a bright spot; from a long-term perspective, the region may boost copper demand. Investment in renewables and efficient building systems would increase copper’s demand. According to the International Copper Association (ICA), copper usage may increase by more than 4 million tons by 2030.

Currently, copper prices are directly affected by Chinese demand, as well as by uncertainty in supply. This downtrend in copper prices might be just a brief pause in a dynamic market. Thus, copper-buying organizations should watch the market closely, looking for a possible uptrend that would show a recovery.

The 3-month LME primary copper price finished May at $5,639/mt, 1.3% below the previous month’s closing price. This drop is smaller than the one observed in last month’s Copper MMI. Indian copper prices fell 1.9%, while Chinese primary copper fell by 2.3%. Despite this, Chinese scrap has increased in value by 1.1%, closing this month at $5,400/mt.