The Construction MMI, tracking metals and raw materials used within the construction industry, bounced back up to 81 for our June reading after notching a 79 for May. 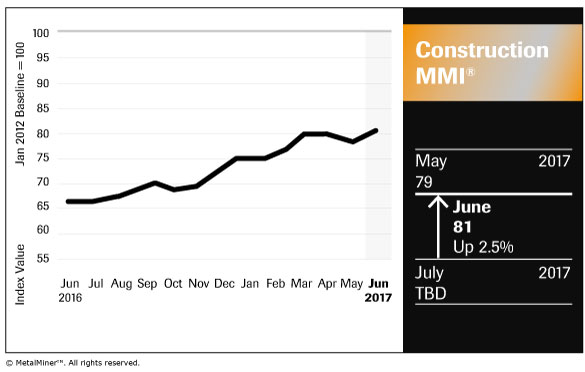 For the most recently available statistics for the month of April, total construction spending dipped from March to April, but April spending exceeded the April 2016 total by 6.7%. The Census Bureau estimates approximately $1,218.5 billion in April spending, a 1.4% decline from $1,235.5 billion in March.

The Architecture Billings Index (ABI), put out by the American Institute of Architects, painted a similar picture. The most recent ABI report for April notes that architecture firm billings increased for the third month in a row.

In the United States, shredded scrap steel again surpassed $300/short ton after dipping under last month. The price for scrap saw a 1% increase. (For the exact prices in this story, log in or sign up below.)

On the bright side for buyers, steel bar fuel surcharges decreased across the U.S.

In the Gulf Coast, fuel surcharges dropped 2.8%. Midwest prices fell by 1.3%. Over in the Rocky Mountain region, prices settled in after a .07% drop on the month.

President Donald Trump’s administration’s investigation into U.S. steel imports — and any resulting policy effects of that investigation — will be something to monitor through the rest of the year and possibly into next year.

Chinese Steel Prices Get a Jolt

While many expect growth to slow in China in the second half of 2017, prices for rebar and H-beam steel increased significantly, bouncing back after a sharp drop in April.

The rebar price spiked by about 9.5%. H-beam steel had a similarly large boost, rising by 7.6%.

In Europe, commercial 1050 aluminum sheets held steady, with prices ticking up by .02%.

Here are the Exact Prices of Those Movers and Shakers