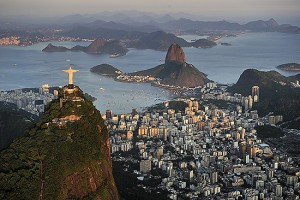 Amid political instability, Brazil is attempting to work its way out of its economic recession. readytogo/Adobe Stock

Brazil is struggling with corruption, particularly among the ranks of the elites, according to the Financial Times.

Just a year after Brazil’s Congress impeached former President Dilma Rousseff, her replacement, 76-year-old Michel Temer, is hanging on to power by a thread following revelations last month that he had engaged in secret talks about bribes with Joesley Batista, the former chairman of meat packing firm JBS. Temer is the least popular president ever, according to a separate FT article, but business leaders and economic analysts say the Brazilian economy desperately needs his reforms if it is to pull itself out of a two-year recession (the worst on record). 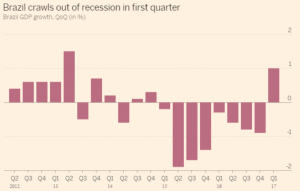 A meager bounce in the first quarter offered scant comfort, coming as it did on the back of a record soy bean harvest, up 13.4% and pushing the agricultural sector into positive territory.

The broader economy, however, remains mired in recession.

Interest rates are still at 10.4% to protect against runaway inflation last year. Imports and exports are down 21% in the first quarter of this year compared to the same quarter in 2015, the FT reports.

Although markets have recovered their shock following the exposure of Temer’s apparent acceptance of high-level bribery, Jimena Blanco, head of Latin America research at Verisk Maplecroft, a risk consultancy, is quoted by the FT as saying, “The government is hanging from a thin thread.”

In a more isolationist America, some may ask: Should we care? Brazil’s problems are Brazil’s — it may be the largest economy in South America, but it is still a long way away, some might say.

Well, yes, we should care, despite all the U.S. talk about retrenchment. The U.S. economy is still highly reliant on global trade. Brazil is America’s 10th-largest export market, fitting between France and Taiwan in dollars earned.

Brazil is also an important geopolitical stabilizer for the South American region. While no one is talking of defaults, the prospect of the recession extending indefinitely raises debt servicing, currency and social stability issues.

Temer may not be the best prospect for open and honest government. At the moment, he may be the least bad option.