An article this week in Bloomberg catches the eye with a title announcing “hard-to-believe” steel shortages in China.
After years of excess supply, over-capacity and atrocious levels of resulting pollution, it would be a bit much to hear the country was short of steel — but that is what Fortescue’s CEO Nev Power is quoted as saying in an interview with Bloomberg Television in Beijing on Monday.
The gist of his claims? Closures of induction furnaces are creating a shortage of rebar, not because market demand is strong but because supply has become constrained, Power explained.
Benchmark Your Current Metal Price by Grade, Shape and Alloy: See How it Stacks Up
Actually, the story is not a new one.

Back in November 2016, Platts reported that a near 275% rise in coking coal prices during 2016 was resulting in the idling of a number of blast furnaces for “maintenance.” In practice, the closures had little impact on the rebar market, as the November-February winter period typically experiences a lull in construction and a fall in demand.
But as spring demand has picked up, it has been met with the pincer movement of low inventory levels due to the winter drop in production and Beijing’s concerted efforts to shut down outdated steel plants, particularly those consuming electricity, in an effort to reduce power consumption from polluting coal-fired power stations. Electricity-consuming induction furnaces have disproportionately faced the brunt of closures, and as induction furnaces primarily produce long products, this has exacerbated the shortage of rebar supply.
For the first time, the Chinese market has faced the bizarre situation of rising rebar prices and falling iron ore prices. Typically, the two prices move in tandem. 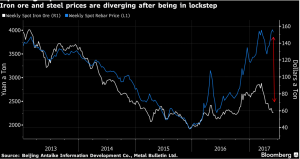 One benefit for producers in the region? Chinese exports of rebar are currently uncompetitive, allowing mills in Taiwan, South Korea and the wider region to ramp up output.
Free Sample Report: Our Annual Metal Buying Outlook

Domestically, the situation is likely to ease in China over the coming months.
Higher prices are encouraging mills with adequate electricity supply to ramp up output, even as construction demand continues to slow.
Fat margins in the Chinese steel industry rarely last long, however. Increased production and new capacity quickly arrives on the scene to take advantage — this time will be no different.
Iron ore prices are unlikely to rise significantly, with so much material sitting in port stocks and plenty of global supply. Rebar prices are likely to fall as production picks up, bringing the rebar and iron ore curves closer to their historical trend.